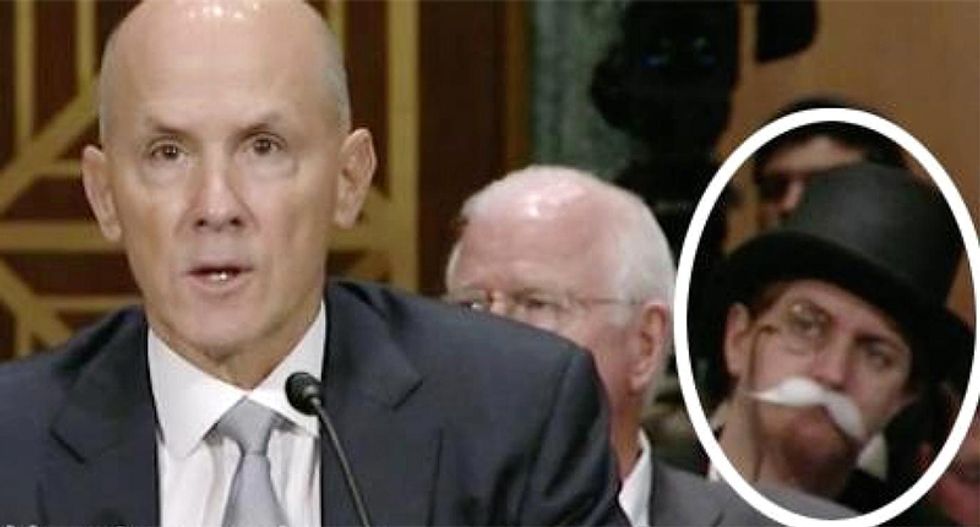 A person seated behind former Equifax CEO Richard Smith during a Congressional hearingseems to have dressed like the icon from the popular boardgame Monopoly.

CNBC caught the man as cameras filmed the House Energy and Commerce Committee hearing on the data breach that exposed 145 million people’s personally identifiable information to hackers. Smith has taken "full responsibility" for the breach, according to his opening remarks. He has since resigned as CEO.

The game Monopoly was invented to demonstrate the evils of capitalism, according to inventor Elizabeth Magie. The game is the best selling of all time.

Public Citizen sent out a press release taking credit for the act of civil disobedience.

"The surprise appearance is part of a campaign organized by Public Citizen and Americans for Financial Reform to draw attention to forced arbitration rip-off clauses, used by Equifax, Wells Fargo and other financial companies to evade accountability and take advantage of consumers," the organization said in a release.

Watch a short clip of the hearing that barely shows the man adjusting his hat and mustache off screen to the right. At one point he leans more into frame, which you can see in the video below: