MSNBC panel wonders if Trump has 'a dependency relationship with Russia' 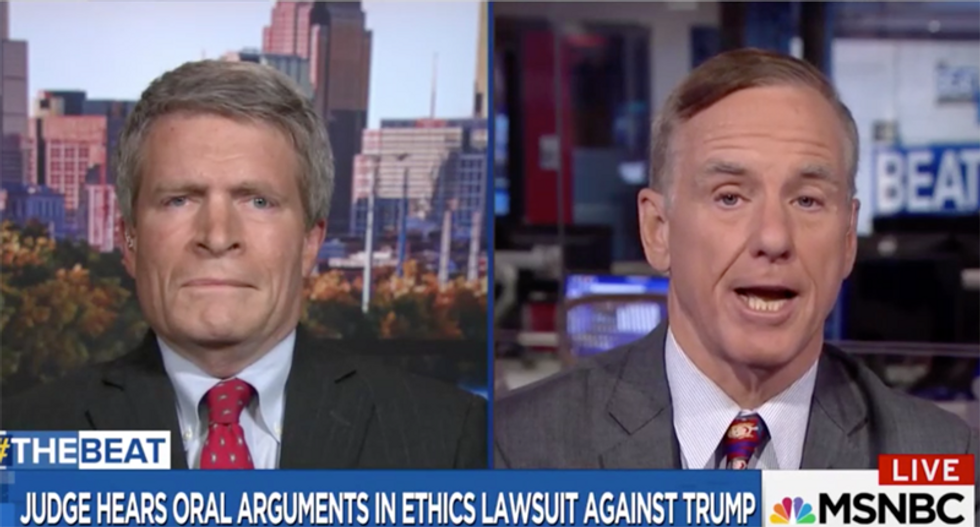 President Donald Trump's conduct was the subject Manhattan federal court as the Justice Department defended a lawsuit by the legal watchdog group, Citizens for Responsibility and Ethics in Washington. The question being litigated is whether Trump is violating the Emoluments Clause of the Constitution with his ongoing business activities.

Hearing was over a motion to dismiss. The judges ruling, however, could end up being legally irrelevant if special counsel Robert Mueller is investigating the same alleged legal violations.

Painter explained on "The Beat" that, "the conduct of the president is in violation of the Constitution."

"This is about a lot more than just who stays in the hotels and books the hotel rooms, it's about the financing of the Trump business empire," Painter explained.

"Any real estate empire is dependent upon an enormous amount of borrowed money and other equity investors. We don't know they are," Painter noted. "All we know about Donald Trump is that ever since the mid 1990s, New York banks wouldn't loan any money to him because they didn't like not getting paid back."

"We don't know where he's getting his money from, and if it's from foreign governments, it's a violation of the Constitution," Painter concluded.

As Donald Trump neither released his taxes nor put his business interests into a blind trust, there is much that CREW hopes to learn as the lawsuit advances.

"Does he have a dependency relationship with Russia? With China? With any other foreign government?" Painter wondered. "We want the judge in this case to find out the facts and then decide if the president is compliant with the Constitution."

"I actually think Bob Mueller is going to have a lot to say about this," Dean predicted.

Months after Oscar-nominated filmmaker Lucy Walker began making a documentary about the largest-ever wildfire in California, the blaze lost its crown to an even bigger inferno.

The 2017 Thomas Fire is now only the seventh worst by area destroyed -- and is likely to be overtaken soon by the Dixie Fire raging through the state's northern forests, as climate change makes wildfire season longer, hotter and more devastating.

Boeing will be aiming to get its spaceflight program back on track Tuesday with an uncrewed flight of its Starliner capsule to the International Space Station (ISS), after its last such test in 2019 ended in failure.

The spaceship is due to launch on an Atlas V rocket built by the United Launch Alliance from Cape Canaveral Space Force Station in Florida at 1:20 pm Eastern time (1720 GMT).