'My heart was broken': CNN's Don Lemon chokes up while reading open letter to Trump 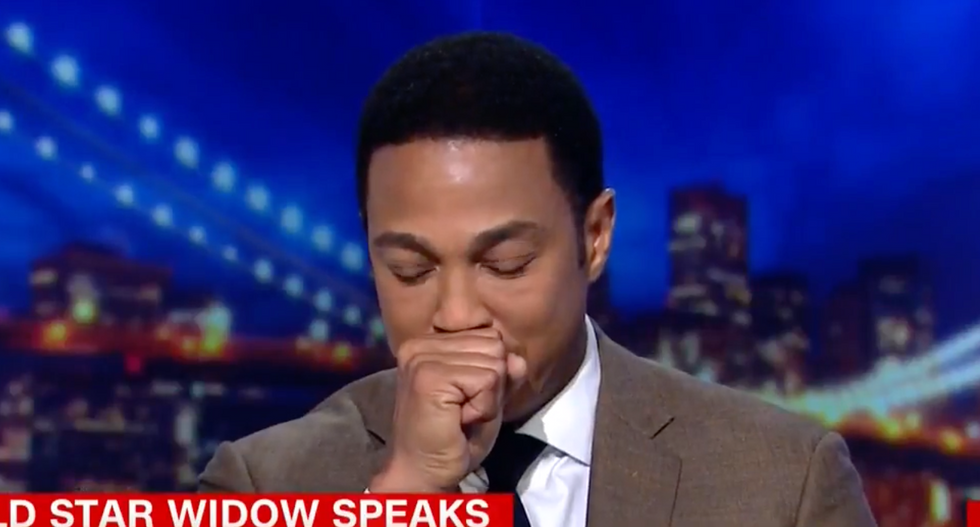 An emotional Don Lemon on Monday choked up while discussing Donald Trump’s continued feud with the family of a slain U.S. soldier, reading an open letter he wrote to the president and the family of Sgt. La David Johnson.

“Today when I woke up and saw the emotional interview with the grieving Gold Star widow, my heart was broken—like most of you,” Lemon said. “And then, moments later, the president tweeted and I was shocked.”

Lemon explained he felt compelled to pen an open letter to Trump, reading the note for his audience. “Dear Mr. President,” he began.

“Since I have this platform, I'd like to speak to you personally right now,” Lemon said. “I feel compelled to do that after this latest controversy with the widow of Sgt. La David Johnson. Your tweet this morning essentially called her a liar. Mr. Trump, please stop it. Please, stop. Think of what Sgt. Johnson would want. You are putting his widow in the terrible position of having to fight for her dignity when she should be concentrating on taking care of herself, her health, her two children and the one on the way.”

“I know you have children,” Lemon later said. “You have two daughters. Can you imagine Ivanka or Tiffany in her shoes having a fight with the commander-in-chief while they are pregnant and grieving? If she is mad at you, take it. Just as President Bush and others did. Take it. It's part of what you signed up for when you decided to descend that escalator and throw your hat in the ring for president.”

“You are the commander, president of the United States of America,” Lemon explained. “The greatest country on earth. Act like it. Act like you know that you're big enough not to have to win every fight or respond to every criticism. Act like you know where the high road is. Competent and secure people ask for help all the time, and they ask for forgiveness. Insecure people think they know everything and need no help.”

Lemon went on to point out the only Gold Star families Trump has challenged are people of color. “How does that look?” Lemon asked. “Apologize.”

Struggling to speak, Lemon later had to excuse himself as he grew visibly emotional.