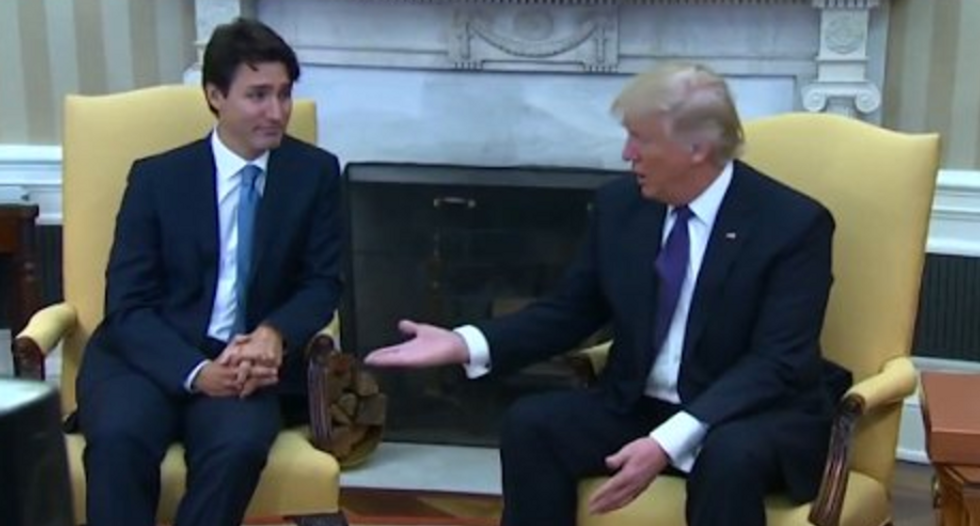 Trudeau will meet with Trump and trade-focused U.S. lawmakers on the North American Free Trade Agreement while hundreds of negotiators, government officials and lobbyists from Canada, Mexico and the United States descend on a hotel in Arlington, Virginia for a fourth round of talks.

The Canadian leader's visit comes amid increasing acrimony over NAFTA renegotiations, with Trump making fresh threats to terminate the 23-year-old agreement and the U.S. Chamber of Commerce on Tuesday accusing Trump's administration of trying to sabotage the talks with "poison pill proposals."

Mexican Foreign Minister Luis Videgaray warned that an end to NAFTA would mark a breaking point in U.S.-Mexican relations and affect bilateral cooperation in non-trade areas.

The NAFTA talks are likely to stall in the face of aggressive U.S. demands to sharply increase content requirements for autos and auto parts, trade experts say.

The Washington round promises to be difficult, with U.S. Trade Representative Robert Lighthizer announcing early on Wednesday that talks would be extended by two days to Oct 17.

Lighthizer also said the three nations have ended their negotiations regarding competition.

People briefed on the U.S. proposals said that the North American content threshold for automotives would rise to 85 percent from the current 62.5 percent, with a 50 percent U.S.-specific content requirement.

"These will be met with widespread opposition from Canada and Mexico. I think it's just a bridge too far," said Wendy Cutler, the Asia Society's Washington policy director and former chief U.S. negotiator for the Trans-Pacific Partnership trade deal canceled by Trump.

In his meeting with Trump, Trudeau is expected to remind the president that Canada is the United States' biggest export customer, with largely balanced two-way goods and services trade, and is not the cause of U.S. manufacturing jobs lost under NAFTA, Canadian officials said.

Mexico has that distinction, with far lower wages that have lured U.S. auto plants and other manufacturers across its northern border, resulting in a $64 billion trade surplus with the United States last year that Trump administration officials have vowed to slash.

Trudeau in April urged Trump not to withdraw from NAFTA due to the pain it would cause on both sides of the border.