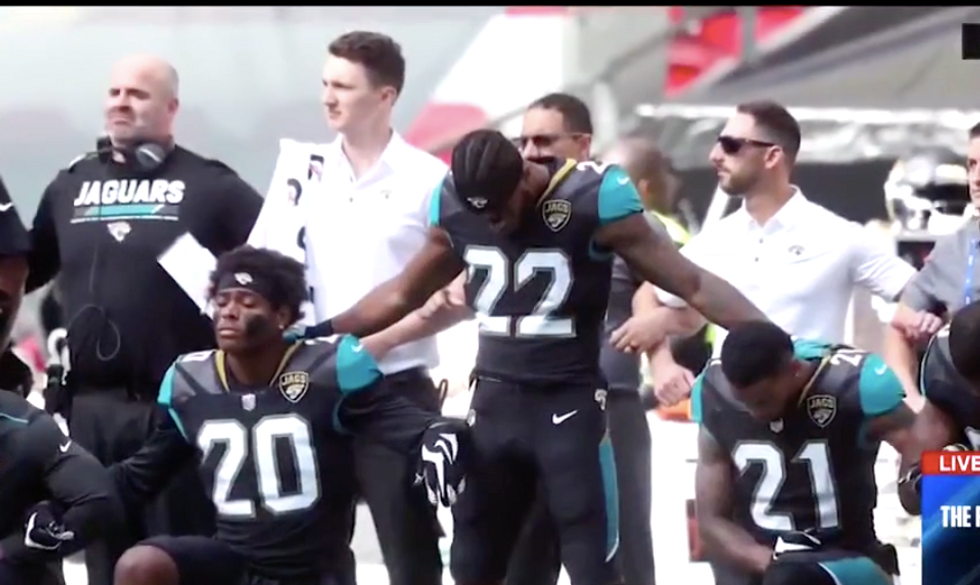 NFL team owners will consider requiring players to stand for the U.S. national anthem after President Donald Trump on Tuesday stepped up his criticism of silent player protests against racial injustice by targeting the league on taxes.

Trump, a Republican, escalated his feud with the National Football League in a Twitter post asking if the league should get tax breaks while players kneel in protest when the "Star-Spangled Banner" is played at the start of each game.

The world's top-grossing sports league gave up its controversial tax-free status two years ago. Its owners are preparing to address the anthem issue at their fall meeting in New York Oct. 17-18, NFL chief spokesman Joe Lockhart told reporters on a conference call on Tuesday.

"Everyone at this point is frustrated by the situation," Lockhart said. "The commissioner and the owners do want the players to stand. We think it is an important part of the game."

The protests in a league where African Americans make up the majority of players have continued through the season, with some players taking a knee when the anthem is played and others standing arm-in-arm in solidarity.

While current policy says players should stand for the anthem and face the flag, no player has been disciplined for a protest, Lockhart said.

"Why is the NFL getting massive tax breaks while at the same time disrespecting our Anthem, Flag and Country? Change tax law!" Trump wrote on Twitter on Tuesday.

What Trump was demanding was unclear since the NFL has given up its tax-exempt status. The White House did not reply to requests for comment.

"There is nothing really here to give up," said Lockhart.

Trump last month called on NFL team owners to fire players who kneel during the anthem to protest police violence against black Americans.

Critics contend Trump is fanning the controversy to distract from issues including devastation in Puerto Rico after Hurricane Maria, tensions with North Korea and difficulties in pushing healthcare and tax overhauls through U.S. Congress.

Vice President Mike Pence walked out of a NFL game on Sunday after some players knelt, a move some critics called a publicity stunt.

Trump won the presidency with less support from black and Hispanic voters than any president in at least four decades.

Trump has squared off against the NFL before, having owned a team in the upstart United States Football League in the 1980s. That league folded in 1985 after an anti-trust lawsuit against the NFL failed.

The NFL was granted nonprofit tax-exempt status in 1942, but gave it up in 2015 amid criticism from members of the U.S. Congress.

Trump has refused to disclose his own tax history, departing from a practice of U.S. presidents going back more than 40 years. Trump has said nobody cares about his tax returns, but critics say they could show conflicts of interest.