‘One of my few sources of truth’: Trump praises ‘good man’ Jeffrey Lord — who was fired for Nazi salute 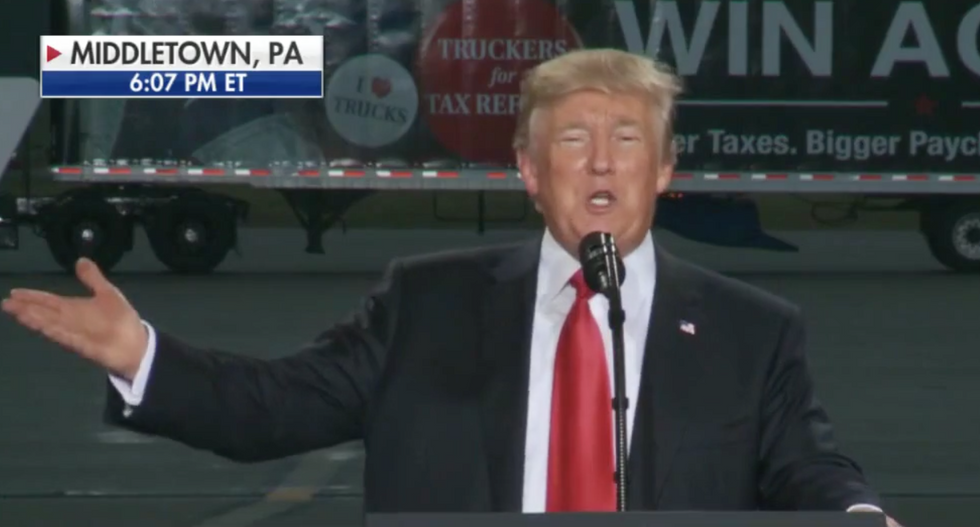 Donald Trump on Wednesday described former CNN commentator Jeffrey Lord as one of his “few sources of truth,” during a tax speech in Harrisburg, Pennsylvania.

“Hi Jeffrey, the great Jeffrey Lord,” Trump said. “He was on ‘fake news’ CNN for a long time, he was one of my few sources of truth.”

Trump called Lord a “good man,” leading the crowd in a round of applause.

Lord was fired from CNN in August after he wrote the words "Sieg Heil!" to a liberal activist on Twitter.

"Nazi salutes are indefensible," a CNN spokesperson said about the network’s decision. "Jeffrey Lord is no longer with the network.” In response, Lord said CNN caved to “bullies.”

Trump has faced criticism over his sluggish disavowal of neo-Nazis following a deadly white supremacist rally in Charlottesville, Virginia. In his initial statements following the attack, the president argued there were “very fine people” on both sides of that incident.

The president went on to tell the crowd of truckers he’s “given up a lot” by becoming president. “My other life was very good,” Trump said.