'Poverty is a state of mind': Ben Carson victim-blames poor and says 'a savior' is the solution 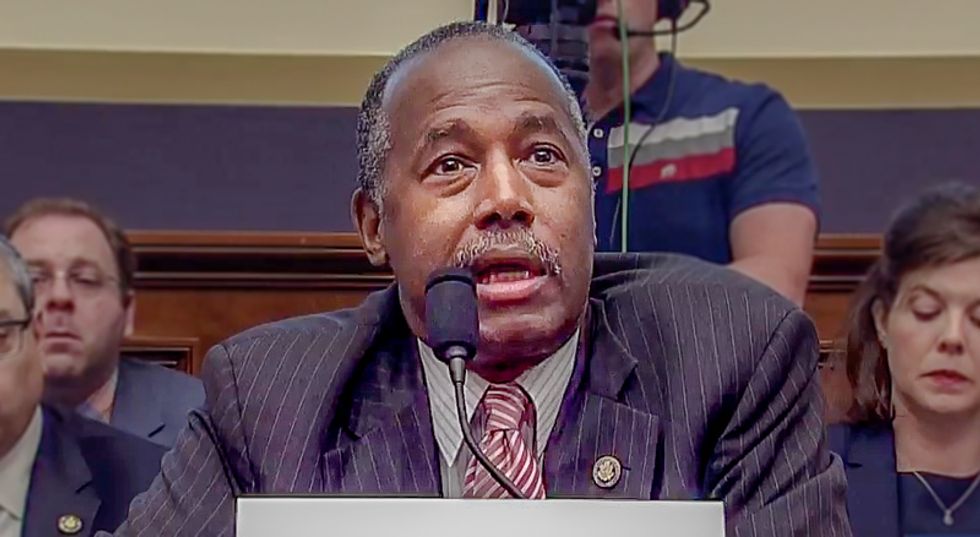 Housing and Urban Development Secretary Ben Carson on Thursday defended his theory that being poor is a "state of mind."

In testimony before the Housing and Urban Development Oversight Committee, Carson accused Rep. Al Green (D-TX) of taking his "state of mind" remarks out of context.

"Sometimes I get a little bit tired of people ascribing to me things that people have said that I believe," Carson complained. "When I say that poverty is largely a state of mind, what I'm saying is that the way that people approach things has a lot to do with what happens to them."

"If your mindset is one that, 'I'm a victim and that everybody else is in control of my life and I just need to sit here and wait for something,' you're going to approach my theory differently than somebody who says, 'I am going to take this issue into my own hands,'" the HUD secretary opined.

Carson noted that his mother married a bigamist at the age of 13 and worked three jobs, "but the one thing about my mother, she was never a victim."

The former presidential candidate acknowledged that the United States was not perfect.

"We as a society would do much better if we stop sitting around trying to tear each other apart," he said. "There are those who allow themselves to be manipulated into just creating dissension."

"Were there mistakes made? Were there problems? Absolutely. Are we a perfect society? We are not. Because we consist of human beings. That's why we need a savior."

Pennsylvania Republicans are reconsidering their opposition to mail-in voting after two statewide election losses in a row.

The battleground state's Republican officials have followed Donald Trump's lead in challenging mail voting through lawsuits and the legislature, but their efforts helped cost the former president re-election and led to a disastrous midterm election cycle for them -- and now they're beginning to see the light, reported Politico.