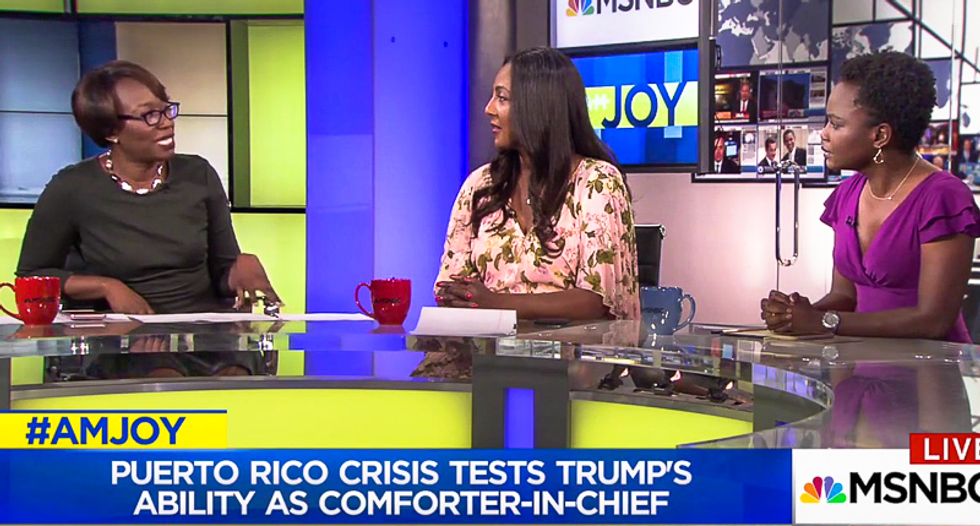 An MSNBC panel over the weekend reflected on President Donald Trump's history of attacking women of color in light of his Twitter assault on San Juan Mayor Carmen Yulín Cruz.

The San Juan mayor became a target for Trump on Saturday after she pleaded in an interview on cable news for him to "save us from dying" in the aftermath of Hurricane Maria.

"Just when you think the president hits rock bottom, he finds a way to take it even lower," Moveon.org senior adviser Karine Jean-Pierre said. "And I think when you look at Puerto Rico, it really brings out the worst toxic brew of Donald Trump, which is the racism, which is the incompetence and also just the egomaniac that he is."

"He's making money hand over fist -- what he's doing every time he's golfing at his resort," she added. "And he has no shame about it. But yet, he's okay with attacking the mayor from the 18th green. That's what he does."

"Also a Latina," she said. "He does seem to have a reflex when it comes to women of color."

"With all women but particularly women of color," MSNBC guest Michelle Bernard agreed. "The way that he has attacked her is absolutely revolting."

Bernard said she had recently spoken to a mental health expert about "the level of narcissism that we see in this man."

"And it's that narcissism that led him to attack the mayor of San Juan," she explained. "And there are pictures of them at the exact same time. He is hitting the ball and she is standing in water, saving lives in Puerto Rico. And then you have to question yourself. Is it because she's a woman? Is it because people speak Spanish there? Is it because he was actually not sure these were Americans and Puerto Rico is a territory of the United States government?"

"I mean, whatever it is," Bernard remarked, "it is absolutely repulsive. This makes the response to Hurricane Katrina -- it makes Katrina look good! Like it was just sweet people trying to do their best and they couldn't do it. This looks intentional."

Reid agreed: "I think with Katrina the idea was sort of indifference or incompetence. Here, it seems to be malice."