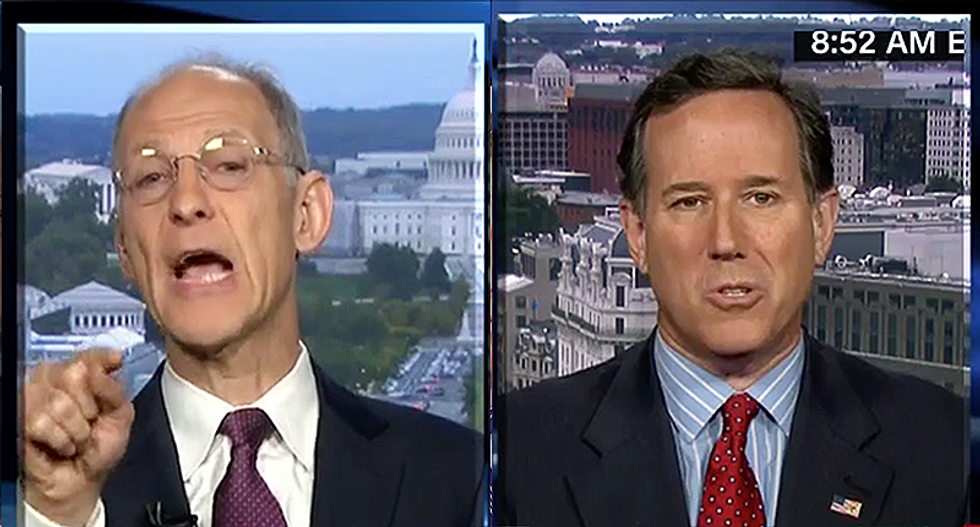 Former Sen. Rick Santorum (R-PA) has claimed that he was the architect behind the Republican Party's health care plan, but when he went up against a former health policy aide for President Barack Obama, his bluff was called.

Santorum has spent a lot of time arguing that the GOP plan to repeal and replace Obamacare is a better deal for everyone involved, while the Congressional Budget Office said it doesn't have time to score the bill. Past GOP bills have received no hearings from healthcare experts and previous budget scores revealed millions would lose their insurance.

Republicans maintain that Obamacare is in a death spiral, but after President Donald Trump's executive order, Democratic strategists said that he effectively pushed it off of the cliff.

Dr. Zeke Emanuel was Obama's health policy advisor while his administration was drafting the Affordable Care Act. He argued that Santorum was outright wrong that premiums would go down for Americans after Trump's executive order. In fact, Emanuel explained that without the subsidies, fewer and fewer Americans will be in a position to participate in the healthcare exchange. When fewer people participate, the insurance companies are less interested. To make matters worse, those in rural areas will quickly lose access. Before, there wasn't a single county that had access to a plan on the exchange, with this new Trump plan, there will be many.

"This thing has been in a death-spiral for a few years," Santorum claimed.

Emmanuel shouted "false!" Going on to cite the S&P and CBO, who both have claimed that the Affordable Care Act's exchanges are solid.

In rural areas, he said that it is difficult to put together a big network.

"And there aren't many consumers. That is not a death spiral. And well-run exchanges, like the Cover California, are actually are doing well, because they have answered all the problems Mr. Santorum has said. They have more competition, they have had larger areas, they have actually done a lot of advertising to bring people in."

Their counterparts are states that have refused Medicaid expansion, sued the administration, fought the mandates and are now feeling the impact of their actions.

"If you want to actually get premiums down, keep the exchanges healthy," he explained. "What you do is you pass the cost-sharing subsidies. You have reinsurance in case excess sick people come in. You heavily advertise. You increase the length of open enrollment, and you target young and healthy people to encourage them to get insurance and indicate to them how cheap the insurance is for them with subsidies. Those will shore up the exchanges."

Santorum stuck to his guns saying that Obamacare is failing and Trump's plan will save it.

Finally, Emanuel was so frustrated he called Santorum's bluff.

"No, because his policies are actually undermining the exchange, and he's not going to lower premiums!" Emanuel exclaimed. "I would like us to come back and see in 2018 if premiums go down or up 20 percent. If they go up 20 percent Rick Santorum has to eat his words."

‘Rick Santorum will have to eat his words... by sarahburris