Russell Brand: If Trump likes borders so much he should have one between his chin and neck 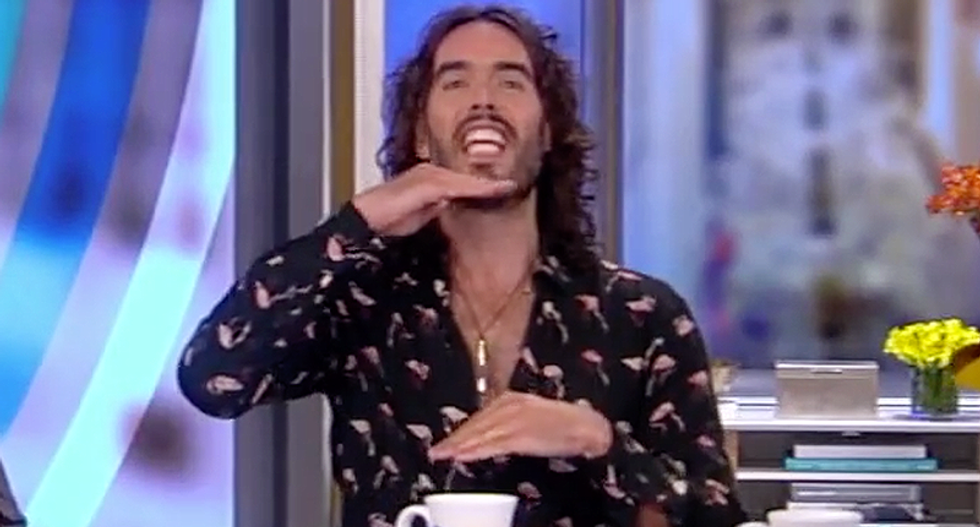 In an interview with the women of "The View," comedian, actor and author Russell Brand revealed the source of his online feud with Donald Trump.

Trump came out of nowhere and began attacking brand on Twitter back in 2014. The world marveled at where it was all coming from. "What the hell do people see in Russell—a major loser!" Trump tweeted.

"Whatever happened to that guy," Brand joked. "He's gone so quiet since then."

Still, even co-host Joy Behar couldn't help but ask, "why you?"

"What happened is I met him," Brand began. "Problems ensued."

But Brand explained that the source was an interview he'd done with Trump for a documentary. “Brand: A Second Coming” was an exploration of drugs, sex, fame and the search for happiness.

"As he was talking, I kept thinking, 'How are we in this big tower this man owns when he's evidently so stupid," Brand said. "I kept trying to understand it. Now, I don't like to be unkind to people so I already feel bad about saying that. But obviously this man practises very much in cruelty, doesn't he? It's like his language."

He went on to say that he was trying to understand it and comprehend it so that he could do jokes about it as a stand-up comedian.

"He heard that I'd said these jokes and some of them were quite cheap," Brand admitted. "Like his hair looks like the ghost of Shredded Wheat. Not even Shredded Wheat that is alive now, but straight from the ethereal realm. I criticized him and I suppose what he's an emblem of; an economic model of economic inequality and privilege, and now using that privilege to further disempower people to speak cruelty from the office of the president."

Brand admitted that when Trump was running he assumed that it couldn't actually happen, but it did. "And now we've got to live with those peculiar consequences." He also said that he understands the rage that his supporters feel because they're being disenfranchised by the majority of their leaders in government. However, he argued that the solution to the rage is not to move further apart but together as a collective group.

"He does look as though he has thin skin. Except in the jowly area. I feel like if he likes borders so much, how about have one between here and here?" Brand continued, highlighting the area of his neck.

He then admitted it was mean and he doesn't like to be cruel. "I take that back," he said.

Russell Brand reveals where his feud from... by sarahburris