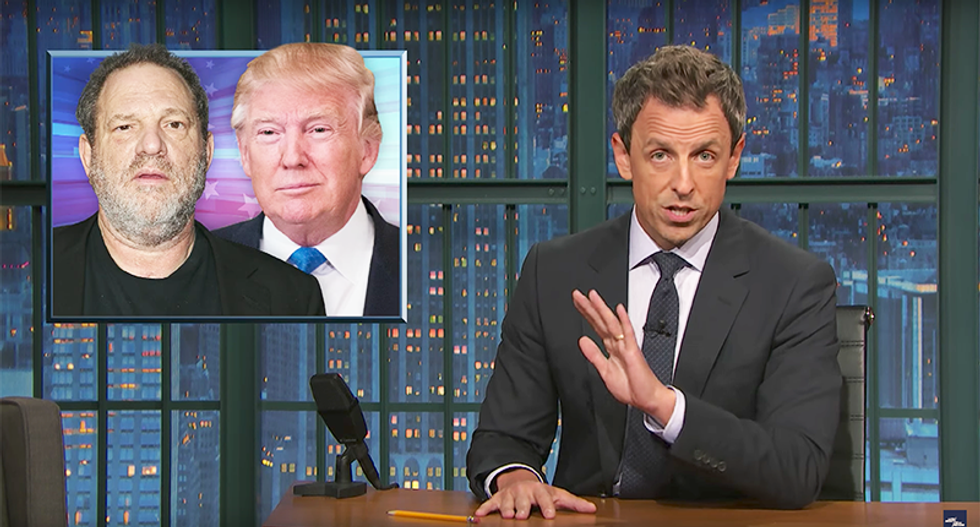 In a rare serious moment, Seth Meyers issued a passionate plea for Americans to stand up against people like President Donald Trump and Harvey Weinstein, both of whom have been accused of sexual assault.

“It’s a reminder that our toxic culture of male entitlement is still very much intact,” Meyers said.

He began his Thursday "Late Night" show by saying that both powerful men have been "abusing their power to silence, bully or coerce." His first example was the way Trump tried to intimidate San Juan Mayor Carmen Yulín Cruz, who has accused Trump and FEMA of being too slow and too little on disaster assistance. Calling it "explicitly misogynist," Meyers played the clip of Trump calling Cruz "not a capable person" during an interview.

"I'm sorry, she's not a capable person?" Meyers asked rhetorically. "What did you do after the hurricane? You took a week to even send FEMA. You reminded them about their debts. Then you showed up two weeks after that and chucked paper towels like a teenager in the break room at CostCo. This is what male entitlement looks like."

“Donald Trump is perhaps the most famous example of this kind of abuse of male power, but he is by no means the only one,” Meyers said, specifically citing Weinstein.

"This entire ordeal is yet another window into the entitled mind of powerful, predatory men who are used to operating without consequence," Meyers continued. "Weinstein thought he could escape the fallout of the allegations against him as he did for so many years, even though those accusations were horrifying."

He played clips of media personalities at Page Six News talking about Weinstein panicking and calling them to comment. They revealed he intends to fight the allegations and expects to be back on top in a year.

“You think you can come back in a year?” Meyers asked, shocked. “If Weinstein had himself cryogenically frozen and woke up a thousand years from now, the headline would still be, ‘Too soon, creep.’”

When it came to former Weinstein attorney Lisa Bloom describing Weinstein as an “old dinosaur learning new ways,” was disgusted.

“Dinosaurs don’t learn new ways," he said. "They go extinct! If you’re a dinosaur, then this is your Ice Age, buddy. And unlike real dinosaurs, no one is ever going to try and bring back Harvey Weinstein.”

Meyers then displayed a poster for a fake film “Jur-asshole Park.”

Citing Roger Ailes, Meyers said the three make up "the most powerful men" in their respective industries. All of whom "have been accused of serial sexual predation.”

He went on to say that things like this shouldn't be a partisan issue, but somehow, everyone is making it into one.

“It requires all of us to speak out and ask ourselves what we can do to address it,” Meyers said. He then directly addressed Kellyanne Conway, who he described as rushing "in to exploit the [Weinstein] scandal for political gain. Oh my God, you work for Donald Trump, remember?!”

Even "puritan" Mike Pence didn't escape Meyers attacks. Pence has a notorious rule that he refuses to be alone with a woman that is not his wife.

“I can’t believe I have to say this, but you should be able to be alone with a woman and not sexually assault her,” Meyers said.

“Look, there are predators of all political persuasions, in both political parties,” Meyers said. When he looked at a photo of Hillary Clinton with Weinstein, he noted that women should also be held accountable if they harass or assault men.

He pleaded with men to “speak up and address their complicity in the system that allows these things to happen."