SNL's Baldwin nails Trump on feud with Tillerson: 'I took an IQ test - it came back positive' 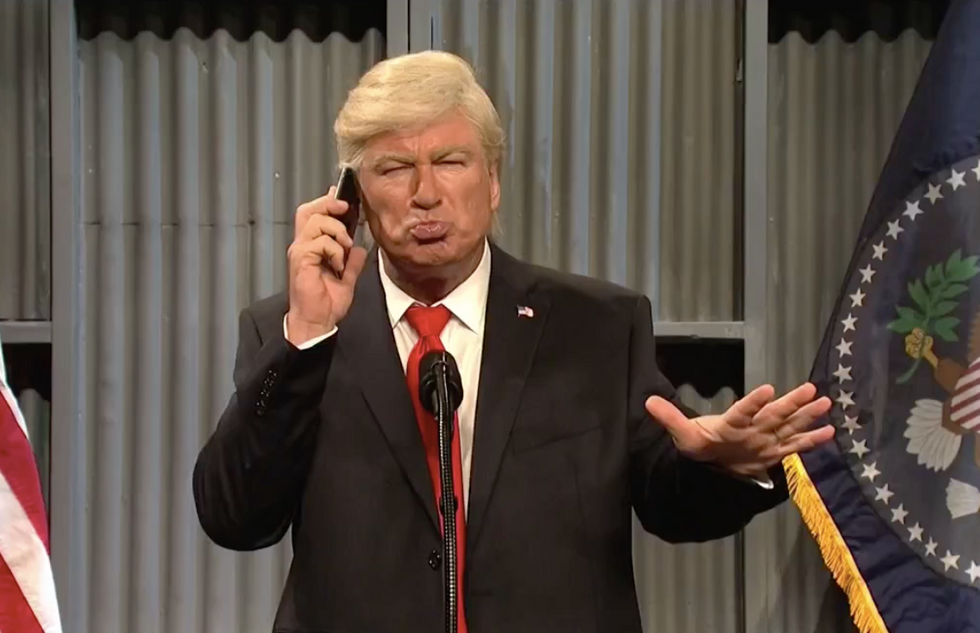 Alec Baldwin returned to "Saturday Night Live" this week as President Donald Trump and sent up Trump's Harrisburg, PA rally to an audience of truckers this week -- while remotely directing Vice President Mike Pence to get up and walk out of events he didn't find sufficiently respectful.

Baldwin as Trump announced that after his theatrical walkout last week, Pence has given up his season tickets to all the Indianapolis Colts games. Now, he said, the White House will be "donating them to two lucky fans in PWAIR-TOE REE-COH! But they have to fly there themselves and get their own hotel. They have to start doing things for themselves!"

He picked up his cell phone to call Pence at an NFL game and asked the vice president, "How are the players acting, are they being little SOBs?"

When Pence spotted a player kneeling, Trump ordered him to get up and out. Later in the sketch, he ordered Vice President and Mrs. Pence out of a Starbucks for not having cups that say, "Merry Christmas."

And finally, Trump ordered Pence to get up and leave a same-sex wedding, "I know you hate this word, Mike, but ABORT! ABORT! ABORT! Vamonos!"

In the meantime, he referenced the president's feud with Secretary of State Rex Tillerson, saying, "How dumb is that Rex Tillerson, folks? I mean, really. What a dumb, dumb, dumb-a-rooney."

"And he had the nerve to call me a moron, talk about the pot calling the kettle Mexican," he said. "I have a huge IQ. I took an IQ test, let me just assure you, it came back positive, very positive."