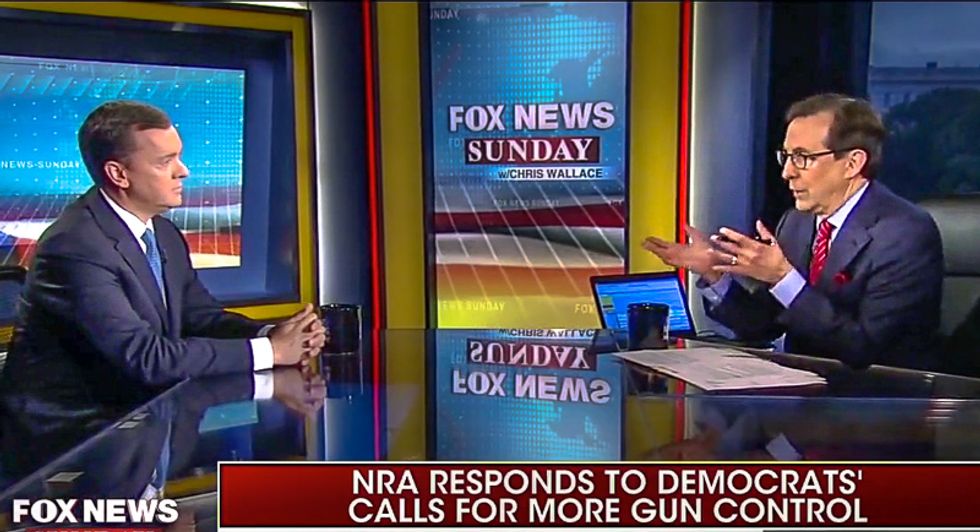 "You say common decency [means] let's wait [on discussing gun laws], what's enough time?" Wallace wondered. "I mean, here were 58 people killed, almost 500 injured. Is it common decency to wait a day, two days, a week, a month. I mean, it is understandable -- I know you don't agree with [Democrats'] solution but what's wrong with saying we need to address this?"

Cox, however, turned the question into an opportunity to attack House Minority Leader Nancy Pelosi (D-CA) and Hillary Clinton, who he accused of wanting to abolish all gun rights.

"Is that a sensible way to have this conversation, to try to turn it into class warfare," Wallace shot back, "where if you're for gun control somehow you're part of an elite?"

"It's not class warfare," Cox insisted. "It's what the American people want."

"That's not actually true," Wallace interrupted. "If you talk about background checks, if you talk about automatic weapons -- there are a lot of people, in fact a majority of people according to the polls who would like to see those gun controls."

"I have to say that I'm put off at the argument, if you believe in gun control, you're an elite," he continued. "I have to tell you, Mr. Cox, I know very few people... who have armed body guards. One of the few people I know who has armed body guards is [NRA head] Wayne LaPierre."

"We can argue ague about the merits off it," Wallace said. "But I think to dismiss people and say, 'Well, that's just the elite and they have armed guards,' it seems to me does a disservice to your argument."

Wallace went on to press Cox on whether people should be able to buy a magazine that holds 100 rounds.

But Cox countered that banning high-capacity magazines would not prevent crimes.

"In Europe, there's virtually entire bans on everything but it didn't stop murderers with machine guns," the NRA leader said.

"Why do shooters need -- people who hunt -- why do they need magazines with 100 rounds?" Wallace asked again. "Do you think 10 rounds would be enough?"

"It can't be a fair and balance conversation if you're not willing to discuss the broader problems we have, the violent culture coming out of Hollywood with video games that have fundamentally changed how military simulators work," Cox concluded without answering the question.