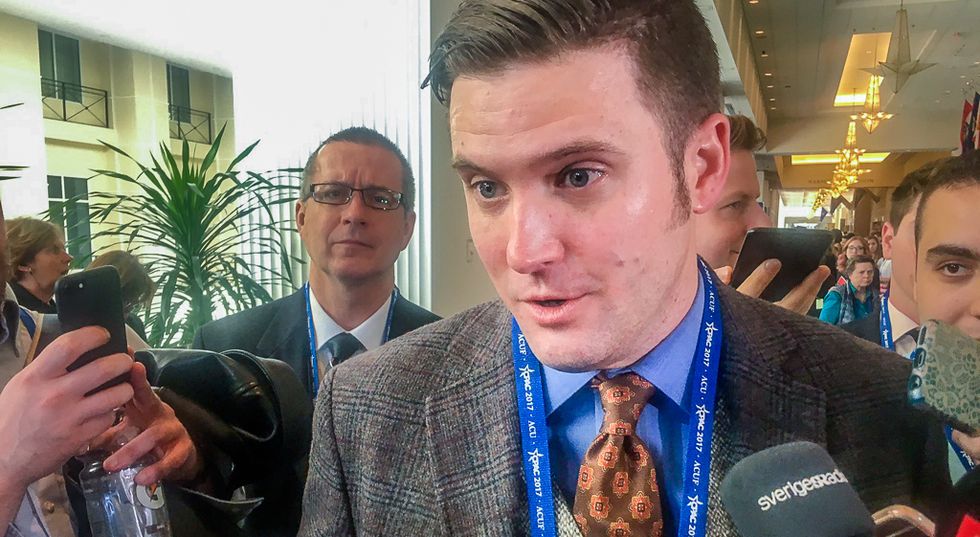 Neo-Nazi Richard Spencer’s speech at the University of Florida on Thursday continues causing controversy, now with leaks showing that Spencer contacted the alt-right group Anti-Communist Action (Anticom) to help with his security.

The media collective Unicorn Riot obtained conversation records that took place between members of Anticom on the gamer app Discord. Unicorn Riot reports that the content of many of these messages has “a substantial amount of hate speech” and that “Anticom members were also keen to discuss Holocaust denial as well as valorize attacks on Jews, Muslims and people of color, with many references to lynchings and gas chambers.” The messages contain calls for violence, including instructions for making bombs, members saying they want to run people over, and a suggestion that the group "bomb a federal building with explosive touch powder."

One message sent out in September 2017 by ‘Pence Bot’, which, as Unicorn Riot explained, “sends automated direct messages from Anticom Discord administrators to other users in the chat,” makes a specific ask to Anticom members in anticipation of Spencer’s University of Florida speech.

This message also contains a reference to ‘Pepe,’ the “founder of the group," according to an AntiCom member who was kicked out.

As Unicorn Riot reports, Anticom’s website is no longer active but it did say that Anticom’s mission "is to defend our communities from radical political violence by physically resisting leftist terrorists and rioters.” Anticom’s Twitter, which is still active and has been tweeting about Spencer’s speech at the University of Florida, has an account description that reads “Better dead than red. Want to punch a commie?” followed by their contact email.

Richard Spencer’s event, which was booked without a sponsoring student group and under the name of his organization, the National Policy Institute, will cost the University of Florida an estimated $500,000 in security costs. Florida Gov. Rick Scott announced a state of emergency preceding the event. There is a protest planned outside of Spencer’s event, organized by the group No Nazis at UF.

In the message sent below the one about Richard Spencer’s request for security, there are references to Anticom’s “March Against Communism,” which was to take place in December in Charlotte, NC. At the end of September, however, the group canceled the torch march.