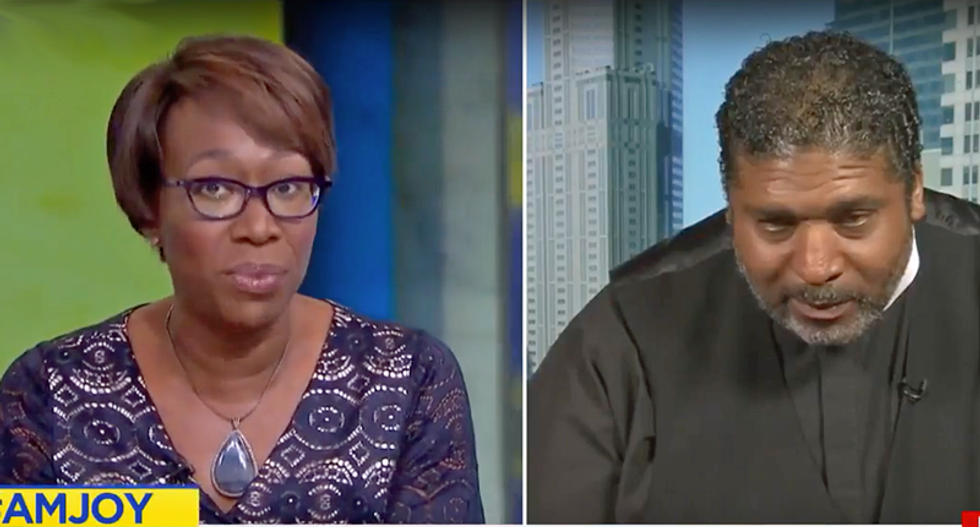 "I just can't call it Christian right, it's so wrong, it's not Christian. Gun-waving politicians that support segregation is not Christian, it's crazy," explained Rev. Barber on MSNBC's "AM Joy" Saturday.

"It’s time really for there to be a major challenge to this kind of public heresy that we see going on that is so counter the real values of Christianity," Rev. Barber concluded.

"We're looking at pictures of him waving his tiny pistol around at this Values Voters Summit," MSNBC anchor Joy Reid replied to Rev. Barber. "The stuff they're distributing there, it feels so counter to the core message of Christian love in the Bible. It's hard for me to believe they read that Bible and get that out of it."

"Actually, from Jeremiah 22 to Jesus and Matthew 25, Christian values for nations and political leaders has to do with love and justice, equality, stopping exploitation of the vulnerable, caring for the poor, caring for children, welcoming immigrants, helping the sick and loving all," Rev. Barber preached. "And by these standards, the so-called Values Summit is not about Judeo-Christian values, it's not about Christianity, but the values of a heretical rhetorical extremism funded by a whole lot of money, perpetrating a fraud on the American people."

"Their values are cash and not Christ, greed and not grace," Rev. Barber concluded. "What the president did was irreligious, it is an anathema to Christian values. He boasted about taking health care, that's not Christian."

"You cannot have a government that creates problems, that has hundreds of years of legalized slavery and segregation that writes policies that lift up the greedy and forgive corporate crooks and then treat people like things and corporations like people and then say there's no responsibility," Rev. Barber explained. "This is a con, it's been going on a long time ... it's as old as the slave master who had people who endorsed slavery and found theological ways to do that."