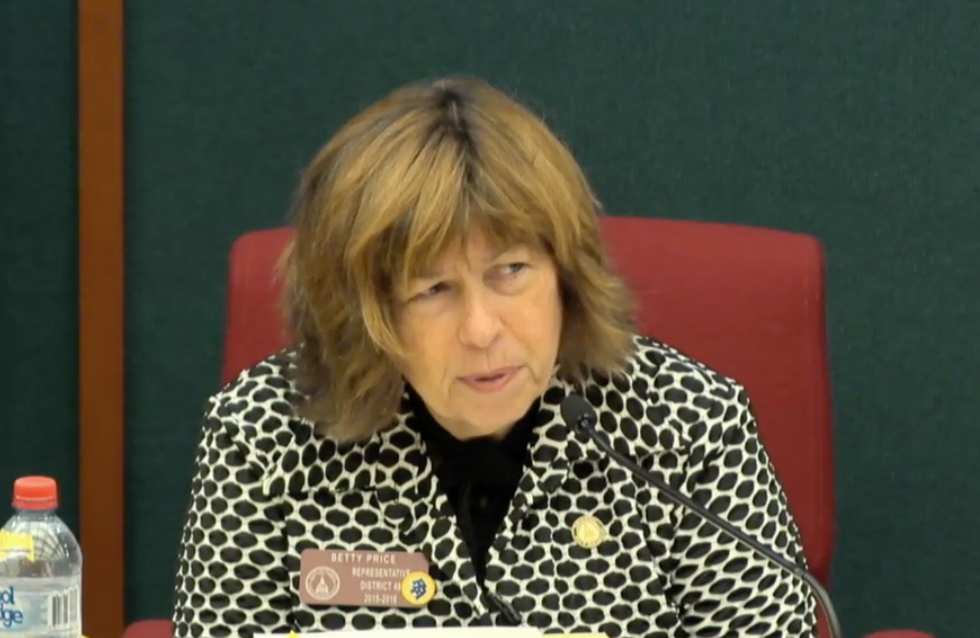 Georgia Republican state Representative Betty Price -- wife of disgraced former Health and Human Services Sec. Tom Price -- has called for HIV-positive people to be quarantined and for their sexual partners to be logged and tracked by the government, according to David Badash at The New Civil Rights Movement.

Price -- a physician -- made the comments at a Georgia House commission meeting about improving state residents' access to healthcare. She directed her question to Dr. Pascale Wortley, the director of the HIV Epidemiology Section for Georgia Department of Health.

"(B)efore you proceed if you wouldn’t mind commenting on the surveillance of partners, tracking of contacts, that sort of thing. What are we legally able to do?" asked Price.

"And I don’t want to say the quarantine word," she went on, "but I guess I just said it. Is there an ability, since I would guess that public dollars are expended heavily in prophylaxis and treatment of this condition, so we have a public interest in curtailing the spread. What would you advise or are there any methods legally that we could do that would curtail the spread?"

In other words, in order for the state save money on HIV prevention and treatment, Georgia should lock up HIV-positive people and subject their sexual partners to government tracking.

She based her concerns on medical advances that allow HIV-positive people to live longer, healthier lives.

"It seems to me it’s almost frightening the number of people who are living that are potentially carriers, well not carriers, with the potential to spread, whereas in the past they died more readily and at that point they are not posing a risk. So we’ve got a huge population posing a risk if they are not in treatment,” Price said.

Tom Price stepped down from his position as HHS Secretary after he was caught spending millions of dollars in taxpayer funds on lavish use of chartered private planes. He's only one of a slew of Trump administration officials who have been caught dipping heavily into public coffers for trips, cruises and tours of Europe.