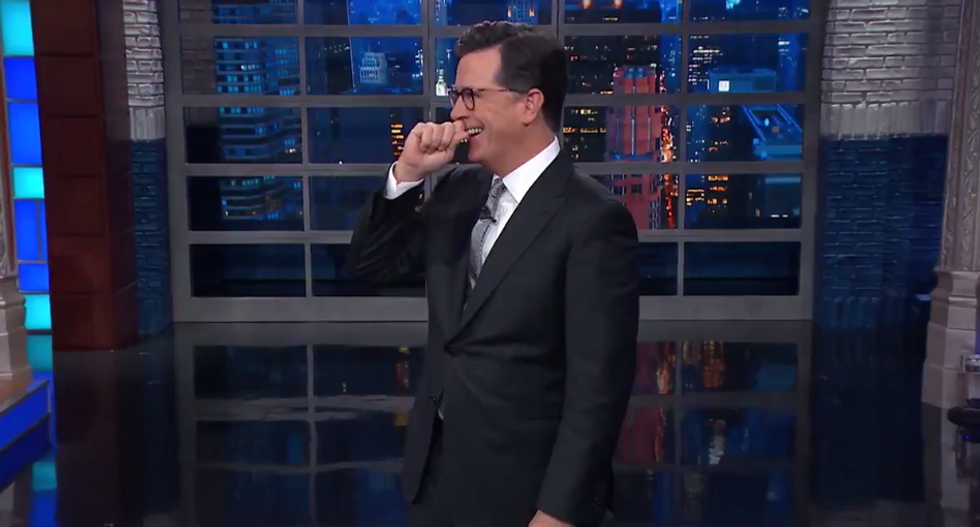 “Late Show” host Stephen Colbert on Tuesday tore into Donald Trump’s four-hour visit to Puerto Rico, joking the president’s assessment of the aftermath Hurricane Maria is “Trumpslaining at its best.”

Colbert noted the president expressed just “how much he loves Puerto Rico,” by visiting the island more than two week after a deadly hurricane left a slowly unfolding humanitarian crisis in the U.S. territory.

“You really got hit, there’s no doubt about it,” Trump told Puerto Ricans at a press conference on Tuesday, before expressing dismay over how the U.S. territory has left the budget “out of whack.”

“The budget is out of whack?” Colbert repeated. “That’s like a fireman rescuing you from a burning building and then saying, ‘you do understand what our water bill is going to be now, right?’”

Colbert then ripped the president for telling a local Puerto Rican to “have a good time” during the hurricane recovery efforts.

“You’re not working the floor at your casino!” Colbert exclaimed, joking, “I’m gonna comp you half a gallon of drinking water!”

The “Late Show” host later turned to a video of Trump asking if people in Puerto Rico would “actually” drink water cleaned via water purification tablets.  “Yes, yes, she’d drink it,” an incredulous Colbert said. “‘Cause it’s the only water she has. Just like she’s only talking to you because you’re the only president we got. She doesn’t have a choice.”

“She wishes the president wasn’t so dirty,” the host added.

TONIGHT: Stephen's reviewing the footage from Trump's visit to Puerto Rico, and it's more "disaster" than "relief." pic.twitter.com/tVfR9mzOFF