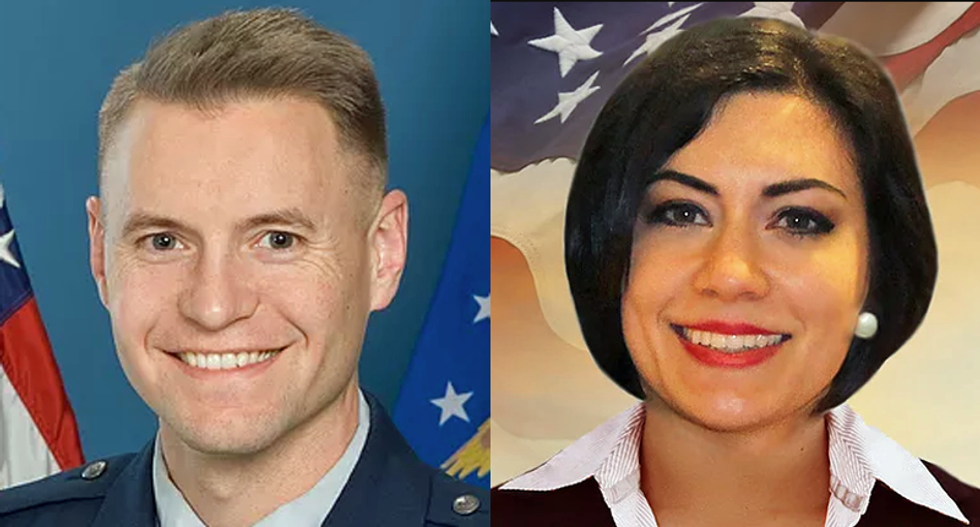 "James Dean" says he is running for the Republican nomination.

"Sarah Dean" says she is running for the Democratic Party nomination.

The two claim to be married. But neither seem to be who they say they are.

William James Dean, who currently refers to himself as James Dean, "filed to run for president in California under a different name, Daniel Lane Dean, the name that appeared on his Air Force Academy diploma, and his Hawaiian state bar exam, and a divorce record that shows him being served dissolution papers while working for the Judge Advocate General Corps at Guantanamo Bay."

That's not all, the Billings Gazette also uncovered that, "Sarah Dean has used no fewer than four names, each affiliated with an online business, or a Christian ministry, a collection of children’s books, or a crowd-funded charity."

The Gazette reporter travelled 250 miles to Havre, Montana to interview the couple and yet they couldn't confirm that they were married nor were they able to give a wedding date or location.

"Let's hold that one for a bit," James requested.

Lutey, a veteran reporter, quickly picked up on the evasion.

"Several of the answers offered by the Deans are like coins in the deep end of a swimming pool, vaguely recognizable but not reachable," Lutey explained of the encounter.

A husband and wife running against each other was looking like the least strange aspect of the story.

For instance, Sarah Dean claims, "her famous music producer father, who Sarah won’t name, relocated his wife and eight children from Chicago to Montana, where he intended to set up a child labor camp. Sarah told The Gazette she escaped from the camp at age 25."

“He wanted us to grow up in a 'Little House on The Prairie' lifestyle, but he also had us to be his slaves. He wanted to build an empire, because there was eight of us kids,” Sarah Dean claimed.

Lutey researched the tale of a slave camp of child labor in Montana and found a different woman with the same name telling a similar story. Then he found different aliases interacting with each other online.

Following links and websites and phone numbers, Lutey pieced the story together.

"It was William James Dean’s telephone number that tied him to an online professional biography, where he cited his law education at University of Hawaii at Manoa. But Dean’s law school accomplishments are credited to Daniel Lane Dean, a name the candidate acknowledged is his," Lutey explained.

Both candidates have filed forms with the Federal Election Commission to begin raising money. Filing to run does not open until 2018, so whether either and/or both actual do run remains to be seen.

Is this an elaborate grift? Performance art? Donald Trump's effect upon the American political system? Or sincere efforts for political change? At this point, nobody seems to know.

One thing is clear, even after being exposed by the Billings Gazette, the candidates do not appear to be backing down.

Following The Gazette bombshell, the Havre Daily News published an extensive correction to note everything the couple had withheld during an Oct. 9 interview.

"We are not concerned about anything in the article," James Dean said about being exposed.