'Volunteer in your own community': Kellyanne Conway says Trump is 'winning' against black anthem protesters 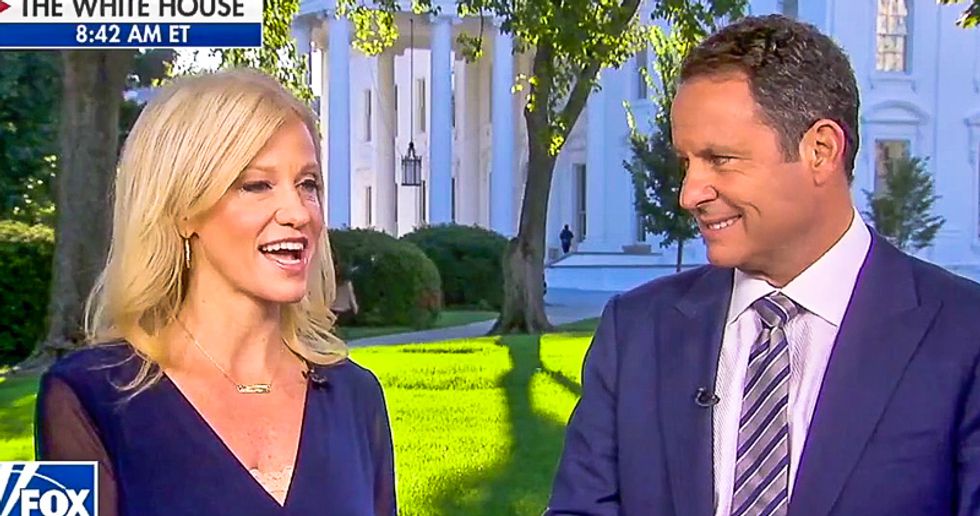 Presidential counselor Kellyanne Conway said on Tuesday that President Donald Trump is "winning" the argument against Colin Kaepernick on whether or not players have a right to protest the national anthem.

During an interview on Fox & Friends, host Brian Kilmeade asked Conway if Trump would be "open to speaking with Colin Kaepernick" to talk about the anthem protests.

"I'm not sure Mr. Kaepernick has called the White House," Conway quipped. "The switchboard is a very active place. I will tell you that there's always room for discussion and conversation on any number of issues and any number of individuals. He someone who's always very open to that."

"He's willing to sit down with Democrats who are willing to support his agenda," she said. "On this issue, I personally think that there are many ways for you to express how you feel on any number of issues."

Conway continued: "If you actually want to take a stand the way some of these NFL players are doing, why is it just the national anthem? Are you civically active? Are you educating younger people? Are you organizing and volunteering in your own communities."

"He's upset about the anthem," Kilmeade pointed out. "That's okay. The president is upset too."

"He's made that very clear," Conway replied. "You can't disrespect the veterans and the blood that's been shed so you and I have the freedom today to talk in front of the White House in a Democratic nation. That's what that's about. And I think the president's on the winning side of that issue."