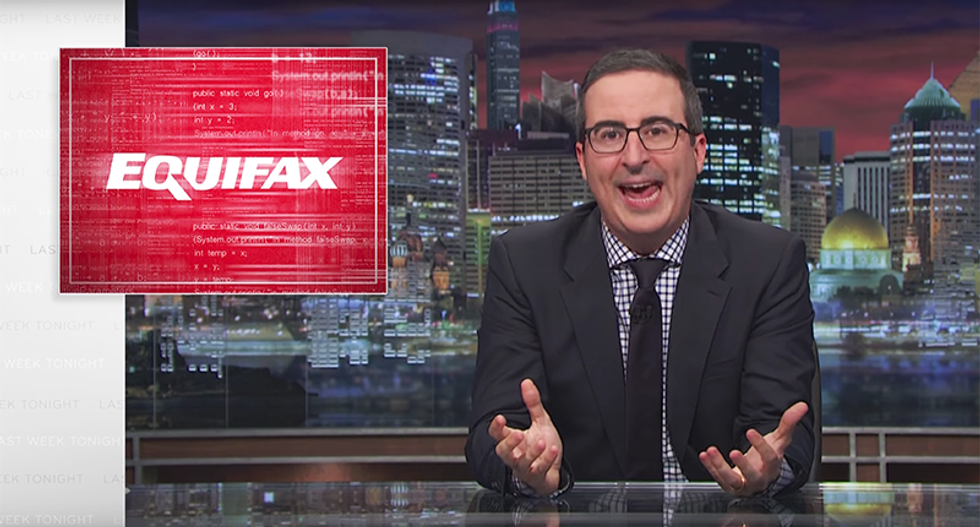 John Oliver's "Last Week Tonight" deep dive segment was dedicated to the way in which the credit agency Equifax has completely and utterly screwed over Americans because it "controls some of our most sensitive information."

According to Oliver, the company completely screwed over 145 million Americans and now criminals likely have access to your Social Security number, address, birth date and other private information. The reason there aren't Benghazi level hearings on this is because "now that every day's headline is simply the words 'Everything Batsh*t Bananas Again Today,' it's slipped under the radar."

This is not the level of the Target breach or even the Yahoo breach, because the majority of Americans under 40 don't even use Yahoo. "This is compromising Social Security numbers, the things that thieves could use to open new credit cards in your name, and if your information was stolen — which, remember, is about a 50-50 chance — it could haunt you forever."

Oliver walked through how something so completely irresponsible could have happened, and "the short answer," he said, "is the people in charge have done literally everything wrong."

To make matters worse, Equifax learned about the data breach back in July, but neglected to tell the public about it until the last possible moment in September. In the meantime, their executives unloaded $1.8 million of their stock based on insider information. The company claimed that it didn't know about data breach at the time despite giving consumers misleading information at the time. They then tried to manipulate customers into waiving their right to sue the company. All of which prompted Oliver to break out into hysterics.

“It’s one of those things that looks suspicious whether or not you’re doing something wrong,” he said. “It’s like walking into a petting zoo with a bib on.”

He went on to detail what you can and can't do as a corporation dedicated to keeping a person's private information safe. The first thing every American should do is freeze their credit with the three major credit agencies, Experian TransUnion and including Equifax, the one who just put your credit and personal records in jeopardy.

"That way, no one can access it, including you, until you unfreeze it," Oliver explained. It will probably cost you money, which is just another way these companies will make millions off of you. To make matters worse, the IRS has just awarded the company a $7.25 million government contract. He went on to say that pretty much, the corporation will always win, regardless of if none of this is your fault and you did nothing wrong.

If you're bothered by this, too bad, Oliver said. "Because they make most of their money selling our data to businesses, like banks. So in their eyes, we're not the consumer, we're the product. To think of it in terms of KFC, we're not the guy being the 10-piece buckets, we're the f*cking chickens."

It may be hard to remember after the roller coaster of a news cycle we've all been riding for the past few years, but during the 2018 confirmation hearings for Donald Trump's Supreme Court appointee Brett Kavanaugh, Republicans actually bothered trying to create the appearance that they took allegations of sexual assault seriously. Republicans on the Senate Judiciary Committee were clearly concerned about looking like they were being dismissive or rude to the woman who stepped forward to accuse Kavanaugh of attempted rape in high school, Christine Blasey Ford. They were so worried, in fact, that the male-only Republican side of the panel hid behind a female interlocutor, Rachel Mitchell, who was hired to question Blasey Ford for them.

The whole thing was just an act, of course. That was obvious at the time, because the Republican-controlled Judiciary Committee, while allowing Blasey Ford to testify, refused to call other potential corroborating witnesses, including a woman who claimed to have had a similar encounter with Kavanaugh in college. But a new report this week underscores the phoniness of Republican claims to take allegations of sexual assault seriously.

A Washington state family is changing their tunes on vaccines after getting infected by the coronavirus.

The Johnson family of Kennwick considered themselves anti-vaccine before falling ill around July 4, believing at first it was related to the sweltering heat wave but soon realizing it was much worse, reported KEPR-TV.