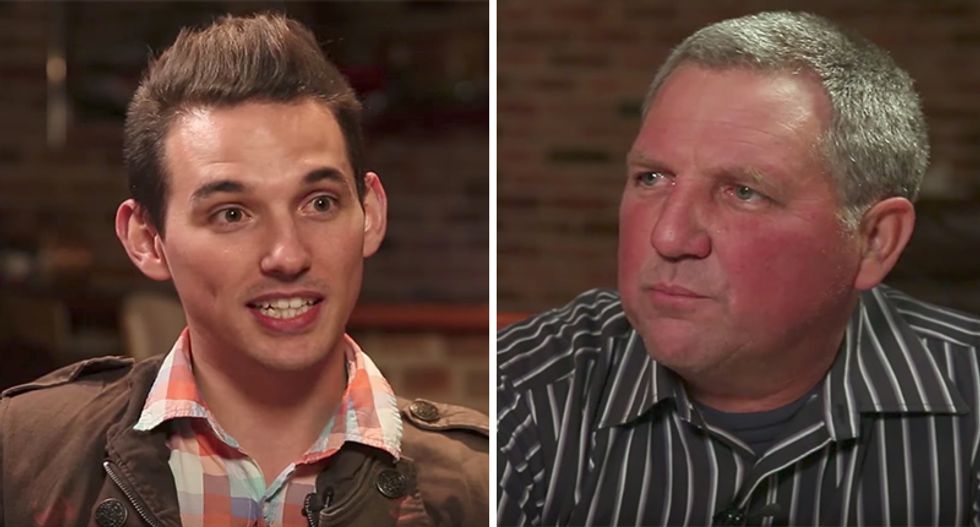 The generational clash between young and older came to ahead live on television, when a 24-year-old gay man confronted his conservative father.

"Do you think it's fair that you can marry the person you love and I can't?" Russel asked his father, Harold, on ABC News Australia.

The country is currently voting in an online poll over whether to legalize same-sex marriage and currently ten million citizens have cast a vote.

"Probably not, no," the father replied. "I think you should be allowed to be with the person you love and be united with that person, but marriage is for a man and a woman."

The two debated back and forth on what the definition of marriage is and the ways in which LGBT community has become more socially acceptable and become part of many democratic cultures across the globe.

Russel explained that separate is not equal and he wants the same abilities as everyone else.

"Being able to marry means I can say, 'Yes, I am married,' and people instantly understand and recognize the weight behind it," he replied. "That’s why it’s such a hot topic. So many people have so much love and respect for this term, and we want a part of that."

Harold maintained that marriage defies his own personal beliefs and thus all same-sex couples must suffer. He admitted he wants the best for his son and if the country legalizes it then he'll support it

"We can agree on that I hope to see you happily married, happily joined with somebody else one day," Harold claimed. "Whether it be a union, and if the government decides it to be marriage, I'll support that too."

The results of the election will be announced November 15.