'We are so into the crazy': Van Jones smacks down GOPer who claims Trump can pass agenda while 'sowing chaos' 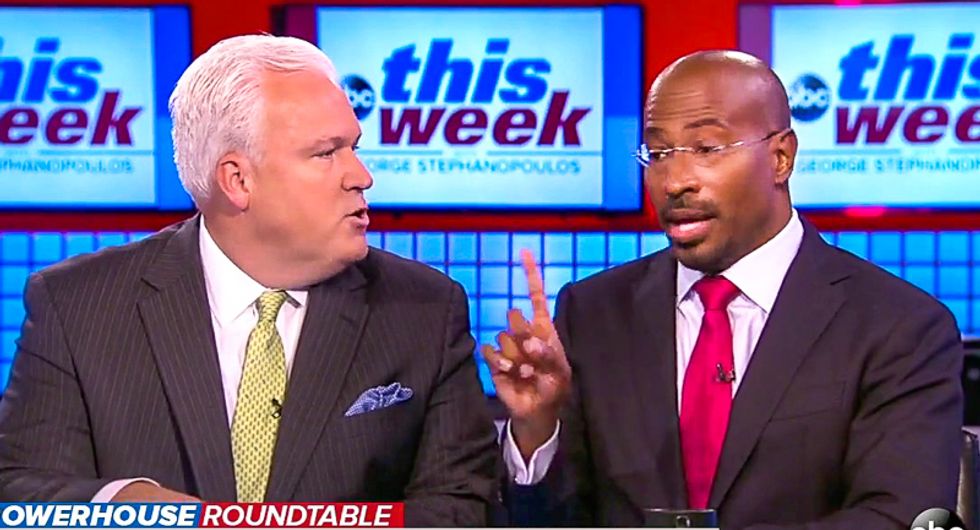 Democratic pundit Van Jones on Sunday shut down a Republican consultant who suggested that President Donald Trump could pass his agenda and keep his promises to the American people while continuing to be a source of chaos in Washington, D.C.

During a panel discussion about Trump's agenda on ABC, former conservative radio host Charlie Sykes argued that Trump was burning bridges with his fellow Republicans and "on a daily basis distracting them from the agenda."

"The role that the president is playing, rather than showing leadership of any kind, he is sowing chaos, confusion and destruction," Sykes said.

"I get the fact that there's an opinion on Donald Trump that a lot of people don't like Donald Trump," GOP consultant Matt Schlapp replied. "The president does want to get it done but he wants to get it done within the context of the other aspects of these polices. So Dreamers are going to have to be accompanied with border security. And [Obamacare] CSR payments are going to have to be accompanied by other health care reforms."

Jones interrupted: "You just described probably the most complicated set of negotiations in the history of the republic, that this guy is ramming through."

Schlapp tried to continue but Jones refused to let him.

"I'm not finished yet, I'm not done," Jones said. "The problem you are having is what you are describing is something that would require real leadership, real finesse."

"On both sides!" Schlapp exclaimed.

"I'll say on both sides," Jones stated, dismissing the Schlapp's point. "But your guy, who you are going to love and defend -- I understand it's your job -- you have to admit he's his own worst enemy. In order to do what you just described, you would need discipline and focus."

The Democratic strategist also lamented that Trump was reportedly moving to end the Iranian nuclear deal and pointed out that Sen. Bob Corker (R-TN) recently warned that the president could start World War III.

"We are so into the crazy now, when something significant happens, we don't notice," Jones said. "[Corker] is not a bomb thrower. And when someone of his stature and his temperament says World War III, that should be a all-cars-stop-on-the-interstate moment. What is going on?"