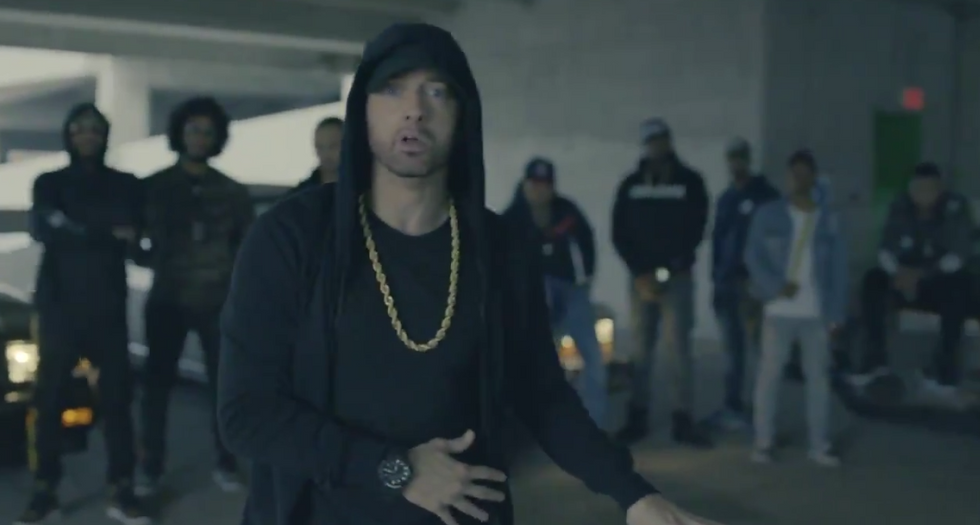 Rapper Eminem dropped a harsh critique of Donald Trump at the BET Hip Hop Awards on Tuesday, taking aim at the “orange” president for his sluggish handling of the crisis in Puerto Rico, his refusal to address gun control after the Las Vegas massacre and his ongoing battle with NFL players protesting the national anthem.

“Calm before the storm right here,” Eminem raps at the beginning of the heavily-bleeped video, referencing the president’s cryptic message last week during a dinner with his national security brass.

“That’s an awfully hot coffee pot, should I drop it on Donald Trump? Probably not,” Eminem continues, before jumping into a powerful verse about the president’s proclivity towards escalating tensions with foreign adversaries.

“We better give Obama props/Because what we got in office now is a kamikaze/That will probably cause a nuclear holocaust/And while the drama pops and he waits for sh*t to quiet down/He’ll just gas his plane up and fly around until the bombing stops,” Eminem raps.

The best-selling rapper continues with a brutal takedown of the president’s distracting feud with the NFL, which Eminem argues the president continues when “he’s bored.”

“But this is his form of distraction/Plus he gets an enormous reaction/When he attacks the NFL so we focus on that/Instead of talking about Puerto Rico or gun reform for Nevada/All these horrible tragedies and he’s bored and he/Would rather cause a Twitter storm at the Packers,” Eminem charges.

The hip-hop artist, who’s noted for growing up in a predominantly black, working-class neighborhood in Detroit—which was immortalized in the 2002 film "8 Mile"—went on to disavow any fan of his who supports Trump.

“Any fan of mine who’s a supporter of his/I’m drawing in the sand a line, you either for or against/And if you can’t decide on who like more and you split/On who you should stand beside, I’ll do it for you with this/The rest of America stand up/We love our military and we love our country but we f*cking hate Trump.”

The FULL verse that EVERYBODY is talking about! @eminem BODIED THIS! #HipHopAwards pic.twitter.com/zoS0wEwjQF