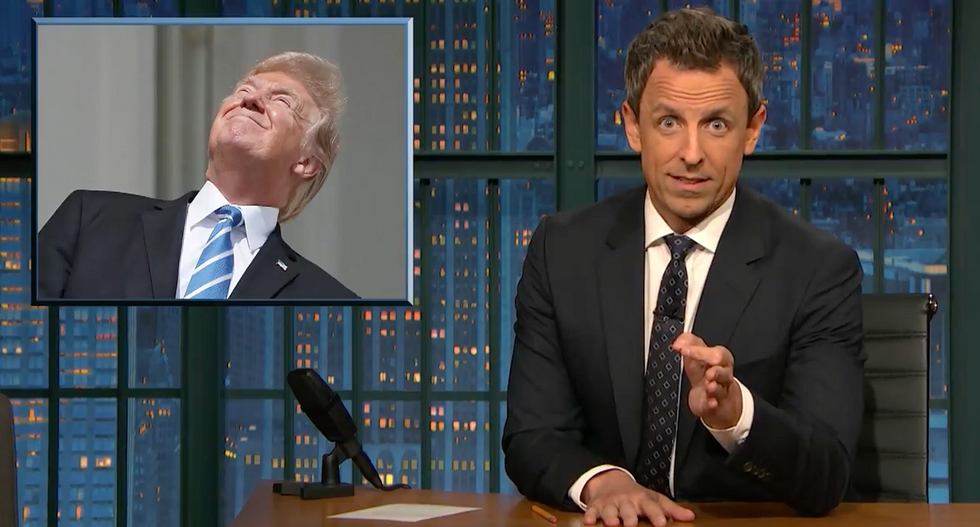 Seth Meyers on Monday torched Donald Trump’s weekend tweets against LaVar Ball, the father of one of three UCLA basketball players arrested for shoplifting in China.

Trump on Sunday took to Twitter to battle Ball, who had downplayed the role the president played in releasing his son from jail.

“Now that the three basketball players are out of China and saved from years in jail, LaVar Ball, the father of LiAngelo, is unaccepting of what I did for his son and that shoplifting is no big deal,” Trump tweeted. “I should have left them in jail!”

Meyers observed the president is transforming into “a mean girl in eighth grade,” noting Trump did not go above and beyond by helping secure the release of three American citizens, but was instead doing what’s “eye-level and right next to you.”

The “Late Night” host called Trump a “petulant man-child-in-chief,” adding every time he thinks the president has “hit rock bottom, he just bursts through the rock and keeps falling.”

Meyers called Trump’s Twitter rage “childish and embarrassing,” adding, “Trump is clearly a thug and a wannabe dictator who lashes out at anyone who isn’t sufficiently obedient.”

Watch below, via NBC: