As Trump targets immigrants, US farm sector looks to automate 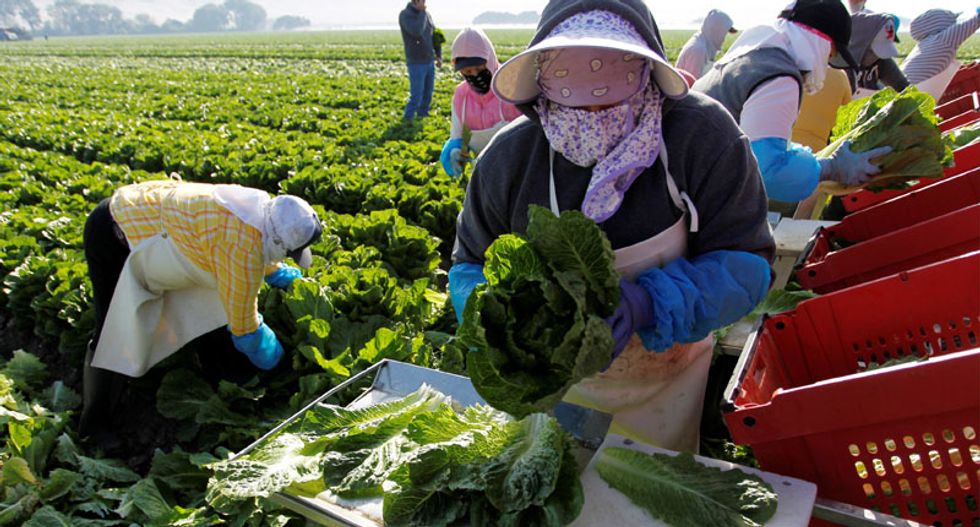 Convincing big U.S. dairy owners to buy robots to milk their cows - and reduce the farmhands they employ - used to be a tough sell for Steve Fried. Recently, his job has gotten easier, he says, in part because of President Donald Trump.

"I get calls on a daily basis and it typically starts with, 'I don't want to deal with this labor headache any more'," said Fried, sales manager for Lely North America, which makes robotic dairy milking and feeding systems.

Trump's crackdown on illegal immigration through stepped-up arrests and border enforcement has shaken the U.S. agricultural sector, where as many as 7 in 10 farm workers are undocumented, according to the American Farm Bureau Federation.

In addition, Republican lawmakers in Congress have introduced legislation that would require all employers to check social security numbers against federal databases to ensure their workers are in the country legally, something that is now voluntary in all but a handful of states.

The get-tough approach "has created a great deal of anxiety," said Tom Vilsack, chief executive of the U.S. Dairy Export Council, who was U.S. Agriculture Secretary for eight years under President Barack Obama.

The shift comes as the industry was already struggling to cope with a shrinking, aging workforce. That is ratcheting up pressure on the sector to embrace new technology.

Farmers and food companies increasingly are moving to automate dairy operations, chicken processing, crop production and harvesting. Even delicate crops such as strawberries and peaches are being considered for mechanization.

"You'd be a fool to not have a plan that moves you that way," said Duff Bevill, who owns a vineyard management company in Sonoma County, California.

Pilgrim's Pride Corp, the second largest U.S. chicken producer, this year cited a tightening migrant labor market as key to its decision to invest in robots and X-ray technology for its slaughterhouses. The goal: to swap human hands for machines that can debone the front half of chickens and perform other chores.

In Gilroy, California, Christopher Ranch is likewise embracing new machinery. The largest North American producer of fresh garlic, Christopher Ranch will spend about $1 million this year for a new Spanish-made robot in its packing plant that inserts garlic heads into sleeves, according to Ken Christopher, vice president of the family-owned business.

A 2014 report by WinterGreen Research forecast significant growth in the use of robotics in "every aspect of farming, milking, food production" and other agricultural enterprises. The report put the market for agricultural robots at $817 million in 2013 and projected that it would reach $16.3 billion by 2020.

Google Ventures, the venture capital arm of Alphabet Inc , this year spearheaded a $10 million investment in Abundant Robotics, which is working on an apple-picking robot. It also participated in a $20 million funding round for Bowery Farming, which uses robotics to grow leafy greens indoors.

While little official data exists to illustrate the impact of Trump's immigration policies on farm laborers, there is no question that illegal migration is down sharply since he took office in late January.

The number of people caught trying to enter the United States illegally from Mexico dropped almost 60 percent between February and May compared the same period last year, according to government figures. Between late January to early September, the number of individuals arrested in the interior of the country by U.S. Immigration and Customs Enforcement (ICE) rose almost 43 percent over the same period in 2016.

Gary Wishnatzki, a third-generation strawberry farmer in Florida, says scarce labor convinced him to raise $5 million so far to build a robotic strawberry picker that he hopes someday will reduce his industry's need for field hands.

Bruce Taylor, CEO of Taylor Farms, a Salinas, California producer of salads and chopped vegetables for stores and restaurants, says his company has automated 20 percent of its packing plant.

The company has also teamed with an equipment maker to build a mechanized romaine harvester that is currently in use, and it is exploring automation for iceberg lettuce, broccoli and other field crops, Taylor said.

In the meantime, farmers are raising wages. Data from the U.S. Department of Agriculture's most recent farm labor report shows average wages during the week of April 9 to 15 were $13.23 per hour, up 4 percent from the same week a year ago.

"The mantra in agriculture right now is automate what you can and pay well for the labor you absolutely have to have," said Paul Pittman, CEO of Farmland Partners Inc, a real estate investment trust that invests in North American farm land.

To win the loyalty of its full-time production workers, garlic grower Christopher Ranch decided to raise pay by 50 percent between 2016 and 2018, getting a four-year jump on California's mandated $15 minimum wage that will take effect in 2022.

"Companies need to find ways of adapting and adjusting," Christopher, the executive, said. "We're going to take a small financial hit, but we're going to be ready."

Follow Trump’s impact on energy, environment, healthcare, immigration and the economy at The Trump Effect https://www.reuters.com/trump-effect