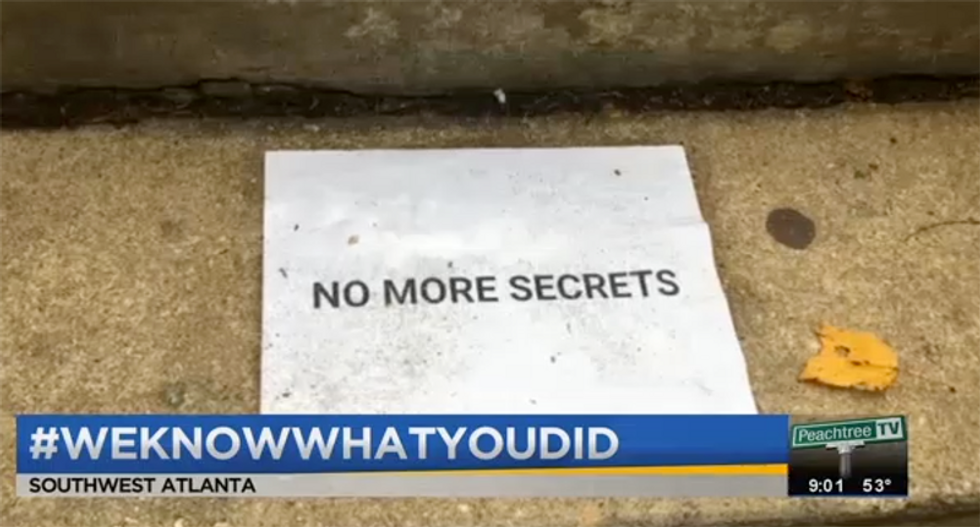 'No more secrets' sign left on the Atlanta University Center Consortium campuses as part of a 'we know what you did campaign' to draw attention to campus rape.

Signs posted on college campuses in Georgia have launched a viral social media discussion about rape on campus, CBS 46 in Atlanta reports. The signs were placed on the contiguous campuses of Morehouse and Spelmen colleges.

"Others say the schools are covering up sexual assaults," anchor Ben Swann replied.

"Hey, I stand with women," Reed noted. "If someones done something like this, you've got the right to call it out."

"Let the chips fall where they may," Reed concluded.

"Definitely, there's got to be something there," reported Kim Passoth added. "There's a lot trending on Twitter tonight, 3,000 Tweets from students. Obviously there's something going on that they need to talk about."

Since 2014, Spelman College says there has only been a single rape and only two reports of dating violence.

"It's very often where victims stay silent and are kept silent, so I think it's beautiful whoever put those posters down," Spelman College senior Micaela Harris told CBS 46.

"Those who have to walk around and see their attackers on campus, it's a constant reminder. So whoever put those sign down is just reminding us what they have to go through," Harris noted.

You can watch the video here.