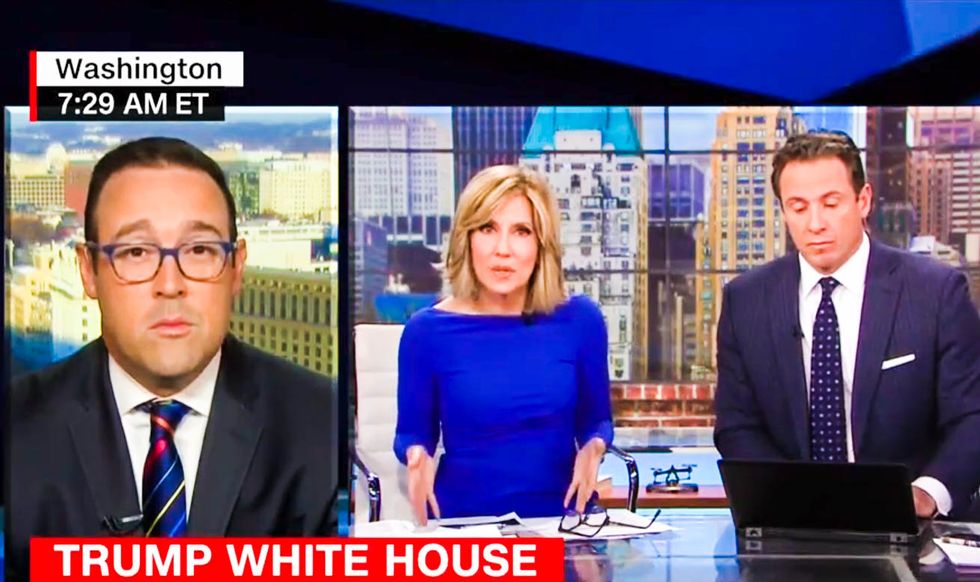 A CNN panel talks about Trump's use of racial slurs at an event for Native American veterans (Screen cap).

A CNN panel on Tuesday took a hammer to the Trump White House's defense of the president's decision to call Sen. Elizabeth Warren "Pocahontas" during an event meant to honor Native American veterans.

Reacting to Press Secretary Sarah Huckabee Sanders' excuse that Trump's "Pocahontas" slur wasn't racist because it was intended to be an attack on Warren and not Native Americans, host Chris Cuomo pointed out that many Native American leaders had called the president's remarks offensive.

"I like when white people get to decide what members of minorities find offensive," he said. "It's a whole other problem. You had the head of the Navajo Nation saying, 'I think it's a slur, I think it's offensive.' That ends that discussion."

Panelist Chris Cilizza said that Trump's attacks on Warren at an event meant to honor Native American vets would likely play well with his base voters, but he said that didn't make it the right thing to do.

"It doesn't make it right for the president of the United States to speak in those terms," Cilizza said. "Even if it works in a political context with his base, which everyone on this panel, everyone on this network agrees -- I think most people on this Earth agree -- it does work."

Later in the panel, Cuomo hammered the president for casting doubt on the authenticity of the infamous "Access Hollywood" video in which he was caught boasting about sexually assaulting women. In fact, Cuomo said that this was even more frightening than the president's decision to use a racist dog whistle at an event for Native Americans, because he has no way of plausibly denying that the video is real.

"It is a lie," Cuomo said. "It is a calculated lie. It is to deceive a group of the population that he hopes believes it."