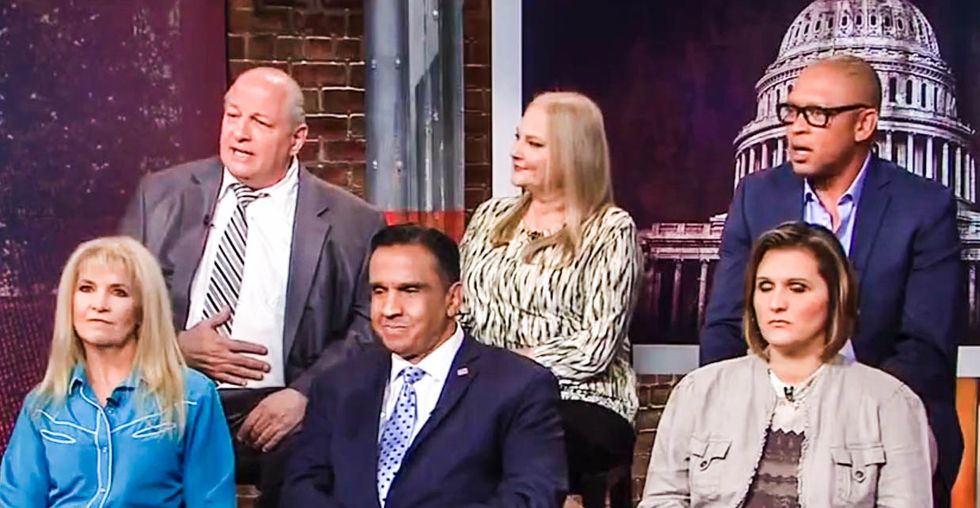 A panel of Trump voters appeared on CNN Tuesday to talk about how little the president has done to unite the country -- but many of them said they were just fine with Trump not condemning neo-Nazis more forcefully in the wake of the riots in Charlottesville, Virginia.

Trump voter Anthony Miles told the panel that he believes the president after Charlottesville simply wanted to point out the "both sides" of the conflict were responsible for causing violence, not just the neo-Nazis.

"It takes two to start a fight," he said. "That's what he was trying to get everybody to recognize, you can't just blame one group of people with rocks, you have to look at the other group with the rocks."

"But people felt that neo-Nazis are sort of in their own category," CNN's Alisyn Camerota pointed out.

"But they're still Americans!" Miles shot back. "Their ideology may make us sick, but that's what's wonderful about America!"

Later in the panel, Camerota presented the group with a large pile of evidence that members of the Trump campaign had blatantly lied about their connections with Russia during the 2016 presidential election, but most of them didn't seem to care.

Trump voter Mark Lee in particular declared that former Trump campaign aide George Papadopoulos, who admitted to lying to the FBI last month, was simply a "janitor" in the Trump campaign who had no real influence over policy. Camerota then pressed Lee to cite evidence that Papadopoulos was really just a small player who was not important to the campaign at all.

"Because Trump says so!" he replied.