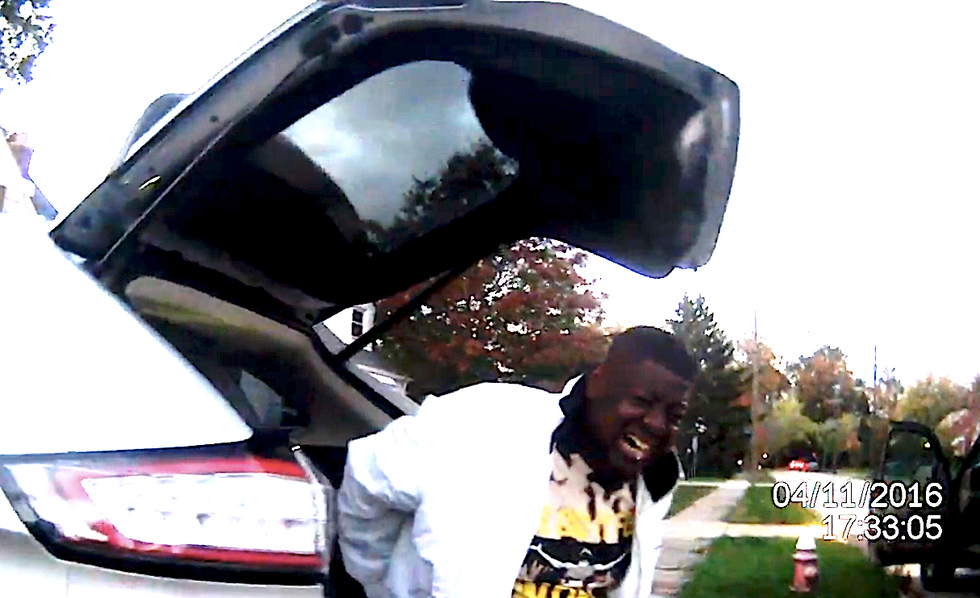 The Euclid Police Department in Ohio has received a third claim of police brutality this year with a lawsuit filed by a man arrested and forcibly detained using a Taser last November.

According to the lawsuit published in Cleveland Scene, a man named Lamar Wright pulled over in his rental car in a driveway "to safely use his cell phone" on November 4, 2016 when two officers approached the car with guns drawn. Wright, who had just had surgery and had a colostomy bag, initially put his hands up as the officers approached, but reached over briefly to grab his colostomy bag as one of the officers was handcuffing him.

Officer Kyle Flagg, whose body cam footage is in the video Euclid PD posted on YouTube, pointed his gun towards Wright immediately upon opening his car door, while Officer Vashon Williams stood behind him with his gun pointed at the passenger as well.

"Flagg yanked on Wright’s left arm," the lawsuit reads. "Wright was still seated in the car at this time, and had staples in his stomach and a new colostomy bag. This, in combination with Flagg yanking on his left arm, prevented Wright from extending his right arm toward Flagg. ... Flagg’s conduct caused Wright extreme pain. Wright cried out to Flagg several times that he was hurting his arm, but Flagg ignored him."

It was then that the officers pepper-sprayed and Tasered Wright, as the video shows.

When they asked him what he was reaching for and why he was doing so, Wright, who was still on the ground in handcuffs, tried to explain that he had a "sh*t bag."

The suit also alleges that the officers "mocked" Wright for his pain upon taking him to the hospital, and that although he made his nearly $900 bond, "he was subjected to a search via a full-body x-ray scanner. ... Only after this scanning was complete, approximately four to five hours after bond had been posted, was Wright finally permitted to walk free."

Wright also claimed he had to pay an $1000 fee for the pepper spray damage to the rental car, and was placed on a "Do Not Rent" list due to the damage.

This lawsuit comes after two other high-profile accusations of police brutality leveled against EPD in recent months: the officer-involved shooting death of a man named Luke Stewart that was "swept under the civic rug" for months and saw no charges against Matthew Rhodes, the officer who shot him, as well as the violent beating during a traffic stop of a man named Richard Hubbard that resulted in the firing of Officer Michael Amiott.

"I filed this case to stand up against police brutality, and to stand with other victims of senseless attacks by officers from the Euclid Police Department. These officers’ illegal treatment of people in the city must stop,” Wright said in a public statement. “We need justice for all the victims of the EPD."

You can watch video of Wright's arrest below.