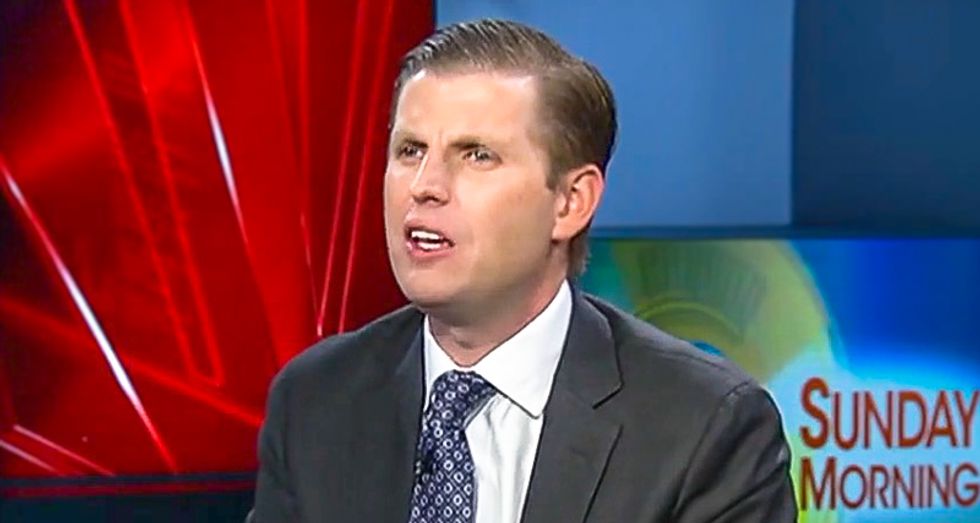 President Donald Trump's son, Eric Trump, said in an interview over the weekend that the investigation into Russia's interference in the 2016 U.S. election is a "total sham" -- but he insisted that a special prosecutor should be appointed to probe the debunked charges against Hillary Clinton in the so-called Uranium One scandal.

During an interview that aired on Fox News on Sunday, host Maria Bartiromo noted that Donald Trump Jr. had become a target of the Special Counsel Robert Mueller's investigation.

For his part, Eric Trump insisted that he had not been interviewed by Mueller.

"The Russia thing is a total sham!" he exclaimed. "It's total nonsense. There is zero collusion with Russia."

Eric Trump then quickly pivoted to the dubious Uranium One case against Clinton.

"To me, it's such a travesty that that's not being investigated because there is something there and it smells and it looks horrible," he opined. "It's horrible what happened and you see all the other bad facts. And you at least know the 33,000 emails and every thing else, the fact that they will look into nonsense, something that didn't happen, and that they will go on tangents for weeks and weeks about nonsense emails [between the Trump campaign and Wikileaks] and other things, but they won't look into hardcore facts."

"It's really a travesty," he repeated. "It's unfair to this nation."

"As an American citizen," Eric Trump said that he "hoped there would be" an investigation into Clinton.