Ex-Watergate prosecutor: 'Jeff Sessions has made it a lot easier' for special counsel Mueller to find him guilty of perjury 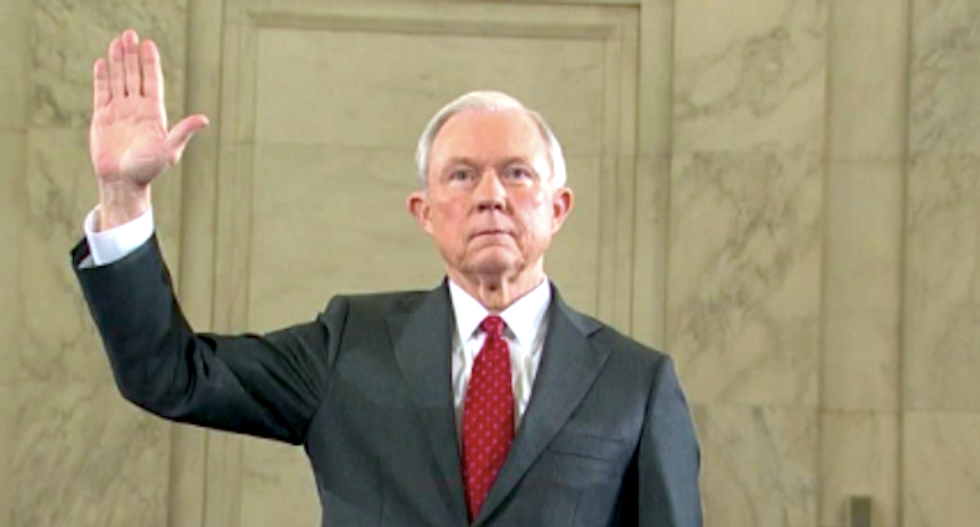 Former Watergate assistant special prosecutor Nick Ackerman knows a thing or two about perjury -- and according to him, Attorney General Jeff Sessions just made the case that he lied under oath that much easier for current special counsel Robert Mueller.

"Did Jeff Sessions roll the ball further away from perjury by the way he defended himself today?" MSNBC host Ari Melber asked Ackerman.

"No, I think he brought it closer to perjury," the former Watergate counsel replied. "Perjury's a very difficult crime to convict people of, because you've got to get in the person's mind as to whether the were telling the truth."

Nonetheless, Ackerman said "Jeff Sessions has made it a lot easier for a prosecutor."

Ackerman outlined the three times Sessions lied in sworn testimony: first, when he falsely claimed at his confirmation hearing that he "didn't recall" meeting with any Russians (he met thrice with Russian ambassador Sergei Kislyak); second, when he sent a letter to Sen. Patrick Leahy (D-VT) claiming outright that he never had contact with Russian officials; and third, when he "denied any knowledge about any [Trump campaign] surrogates having any contact with Russia." The latter was proven to be a lie after it was revealed that former campaign aides George Papadopoulos and Carter Page told Sessions about their contacts with Russians.

"What you have are just outright here is three blatant lies," Ackerman continued. "It's hard to explain it away by mistake or lack of recollection."

The former prosecutor went on to say that rather than genuinely forgetting, Sessions appears to be using "the old 'I don't recall' trick" intentionally because he never "imagined in a million years" that former campaign aides would come forward -- or that a special counsel would be appointed.

"I think he was just trying to stonewall this straight through, hoping that the whole thing would go away," he said.

Watch the former Watergate counsel and "Sessions expert" discuss why the attorney general is using the "I don't recall" tactic below, via MSNBC.