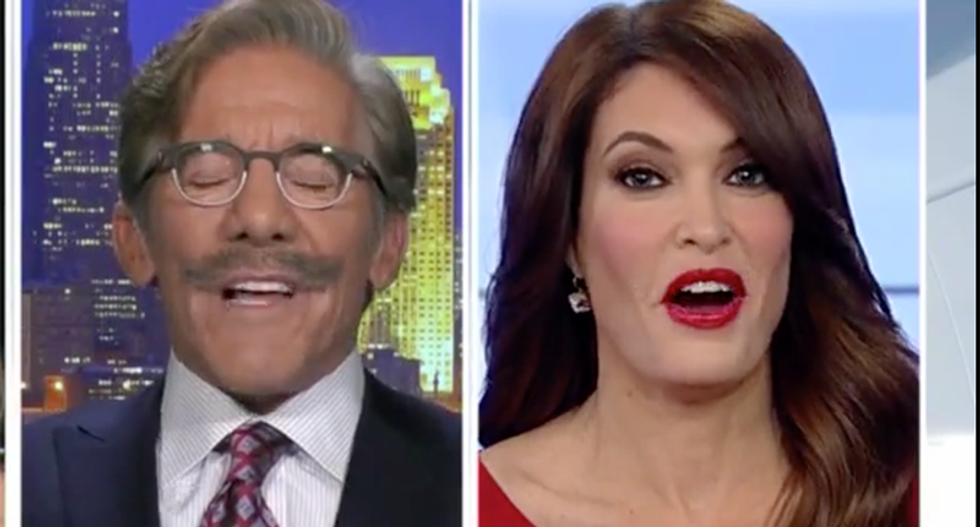 During a panel discussion on the sexual harassment allegations popping up on both sides of the political aisle, Fox News host Kimberly Guilfoyle couldn't help but call out Geraldo Rivera on his own excusal of sexual misconduct.

Rivera mentioned the allegations facing Sen. Al Franken (D-MN), that he grabbed the buttocks of a woman while taking a photo of her.

"What about the allegation that's gaining quite a bit of legitimacy and currency that George H.W. Bush -- Bush 41 -- from his wheelchair, tells a joke when women stand along side him, 'Who's your favorite comedian? Mine is David Cop-a-feel,'" Rivera recalled. "You know, and he pats the ladies on the butt. I mean, if it's outrageous for Franken it's outrageous for George H.W. Bush and you talk about senior citizens, he's, uh, what, 93-years-old."

Guilfoyle quickly cut in wondering then why Rivera was making excuses for the elder Bush.

"You were the one who was making some kind of exception for those that are elderly or infirm, that after a certain age they get some kind of 'get out of sexual harassment jail free' card," she said.

"Well, maybe I was speaking, you know, as a senior citizen myself," he replied.

A stunned Guilfoyle gasped audibly at the comment, presumably understanding that Rivera seemed to be giving himself a pass as a senior citizen.

Rivera stepped into it once again at the close of the interview where he brought up Rep. Joe Barton (R-TX) caught sending photos of his genitalia to women he was dating. The women then attempted to blackmail him with the photos in a kind of "revenge porn" scam. Barton was dating a "mature adult woman," and the photos were exchanged as part of their relationship, CNN reported. Rivera seemed to think there was was some sort of impropriety and compared Barton to former Rep. Anthony Weiner (D-NY), who is now serving time for sending sexually explicit photos to a minor.

Rivera then demanded a standardization of repercussions for bad behavior. Rivera himself came under scrutiny and mockery when he tweeted a nude photo of himself with his genitals barely covered with a towel outside of a shower. His tweet claimed "70 is the new 50."