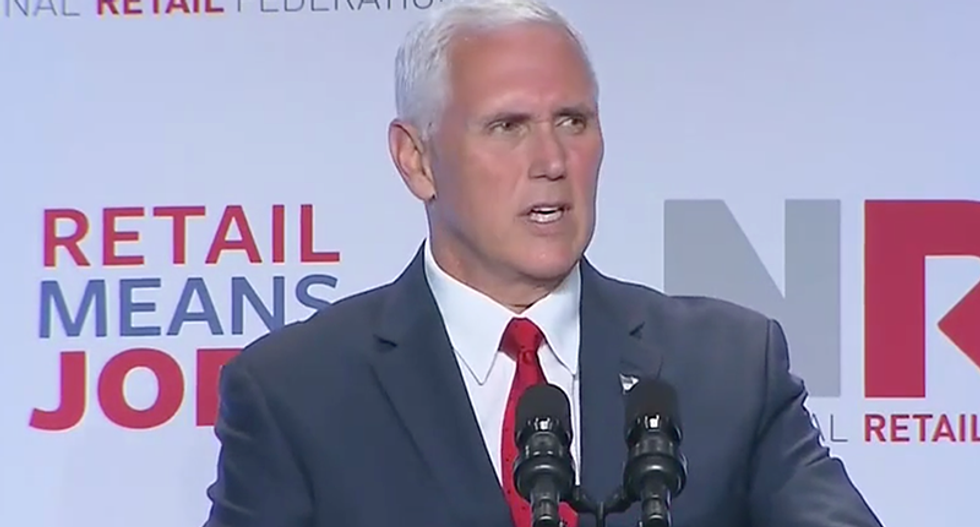 It’s frequently joked that the loudest opponents to LGBT rights turn out to be gay themselves. The assumption has gained steam as anti-gay preachers like Ted Haggard were outed by gay prostitutes. Raw Story Vice Chairman Michael Rogers gained fame in the early 2000s for outing Republican members of Congress and their staff if they voted against LGBT legislation or worked for members that did. The activism became the subject of the 2009 documentary Outrage.

According to the Daily Beast, however, 2017 has become a "banner year" when it comes to those alleging secret homosexuality in politics. Vice President Mike Pence has long been the target of memes and jokes, however, former Ohio state Rep. Wesley Goodman was the one forced to resign last week after being found having sex in his office with a man. Earlier this year, former Oklahoma state Sen. Ralph Shortey was caught prostituting 17-year-old boy, though he pleaded guilty only to child sex trafficking. Both men are married to women and both are outspoken critics of LGBT equality.

The Beast cited a 2012 study from the Journal of Personality and Social Psychology that prompted news outlets like The New York Times to post headlines like: “Homophobic? Maybe You’re Gay.” The study suggested that some of the most strident "straight people" who showed signs of homosexual desires were more likely to discriminate.

The same study was cited after the 2016 Pulse Nightclub shooting, after it was found gunman Omar Mateen frequently went to LGBT clubs and was on the gay hookup app Grindr.

The chief author of the study, Netta Weinstein, explained in a press release that the worst offenders “may be threatened by gays and lesbians because homosexuals remind them of similar tendencies within themselves.” Thus, American politicians attempting to hide their desires can button up and prove they're straight by attacking LGBT equality and same-sex marriage.

The 2012 study is far from isolated research. Other research has gathered similar conclusions. The Beast cited a Science magazine report after Pulse with a “scattering of research” suggesting “some conflicted gay men might indeed be homophobic.” Such as a small 1996 study in the Journal of Abnormal Psychology that actually charged genital arousal in men and linked homophobia to homosexual arousal. Notable, however, is the word "some." Response may vary.

The Beast argues there is enough research at this point that can verify that there is some truth to the "armchair psychology," but the theory of secret homosexuality is far from a 100 percent predictor. A Pew Research Survey counted 20 percent of people who self identifies as "highly straight," which is 10 percent fewer than the 32 percent of Americans who still oppose same-sex marriage.

While Pence might fall under both self identifying as "highly straight" and rabidly opposed to same-sex marriage, it doesn't mean he's secretly gay, despite his curious marriage traditions.

Worse, making such generalizations can actually harm LGBT rights and the movement. Lesbian comedian Carmeron Esposito has been critical of Pence's homophobic undertones

“Making fun of ‘closet cases’ only reinforces homophobia” because it “underscores the idea that being gay is shameful and should be hidden," said queer writer Lindsay King-Miller. It provides an “excuse for straight people” to mock men like Goodman or Shortey but still feel as though “they’re allied with The Cause.”

While the famous Shakespeare quote "The lady doth protest too much" might apply to the rabidly anti-gay, it isn't always applicable to every homophobic legislator. As newly elected transgender state Delegate Danica Roem proved, there are better ways to achieve new strides in the LGBT equality movement.