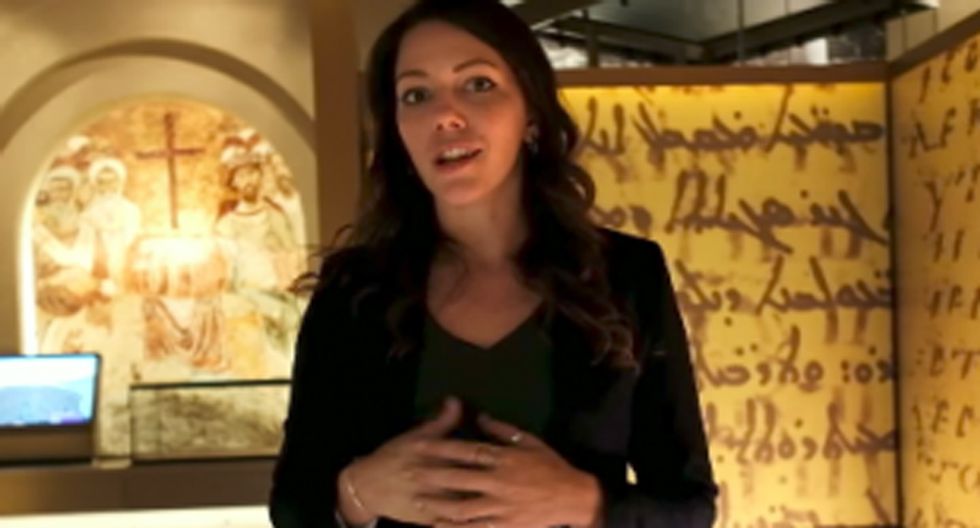 Visitors to Washington, D.C. will now be able to add the Museum of the Bible to their sightseeing to-do lists. The museum, which cost $500 million to build and opens Friday, proclaims its purpose is, “to invite all people to engage with the history, narrative and impact of the Bible.” However, the Museum of the Bible and its founder Steve Green have been entangled in politics, making the high-tech, 430,000-foot space more controversial than it may appear. It's all part of a larger pattern of the mixing of politics and religion in spaces that are billed as being for entertainment or education.

In an interview with Philanthropy Roundtable, Green said the museum is “not evangelical. It’s more informative.” However, Green, who is the CEO of Hobby Lobby, footed the bill for the museum and is the chairman of the museum’s board. The Green family provided artifacts—while Hobby Lobby has faced legal action over the smuggling of artifacts. The museum's other controversial board members include Gregory S. Baylor, who works at Alliance Defending Freedom, a designated hate group by the Southern Poverty Law Center.

In advance of the Friday opening, a fundraising gala will be held at the Trump hotel on Thursday. Some employees told the Washington Post that they were uncomfortable with the choice of venue, though Linda Koldenhoven, the director of Women’s Initiatives and Networking for the museum, told the Post, “We wanted it to be beautiful, and [the Trump hotel event space] is beautiful, and available.”

The Museum of the Bible will also be home to research and a Bible curriculum. As Business Insider reported, however, a previous attempt to house this curriculum in Oklahoma schools was “withdrawn following complaints the lessons weren't neutral." Steve Green insisted to Politico that while “his family openly supports evangelical outreach programs and more overtly evangelical-themed Bible attractions,” the museum is “a separate endeavor.” Yet D.C.'s new Museum of the Bible is part of a larger landscape of highly politicized evangelical museums across the United States. Here are three other such institutions:

1. Creation Museum: Located in Kentucky, the Creation Museum is operated by Answers in Genesis, which claims to “seek to expose the bankruptcy of evolutionary ideas.” AIG has been at the forefront of debates regarding teaching creationism in schools, and its website urges kids to start a “Creation Club” in their own schools. The museum features exhibits on "creation science" as well as biblical history and dragons. AIG founder Ken Ham (who once debated Bill Nye), regularly tweets about marriage, abortion and the separation of church and state:

And about evolution and science:

2. Ark Encounter: Also in Kentucky and operated by Answers in Genesis, Ark Encounter is billed as a "full-size Noah’s Ark, built according to the dimensions given in the Bible.” The attraction features exhibits on Noah, ziplines and special Christmas events. The Ark Encounter has been at the center of a back-and-forth debate about tax status, beginning in 2014. When Kentucky withdrew the sales tax rebates of $18 million over issues of church and state, there was a lawsuit and Ark Encounter won. As of July 2017, the incentives were yet again in contest due to the Ark Encounter property being transferred.

3. Holy Land Experience: Self-described as "a living, biblical museum” the Orlando attraction includes a musical and claims to be educational, inspirational and historical. The Orlando Sentinel reported that the Holy Land Experience “receives a special tax exemption because it’s classified as a church instead of a theme park.” Inside the attraction, the “Church of All Nations” has a 2,000-seat capacity and is used for musical acts and performances as well as church services. The Holy Land Experience is owned by the Crouch family, founders of the televangelist Trinity Broadcasting Network, which faced controversy of its own due to a molestation lawsuit filed by the founder's granddaughter.