How the Vietnam war ended up giving us President Donald Trump 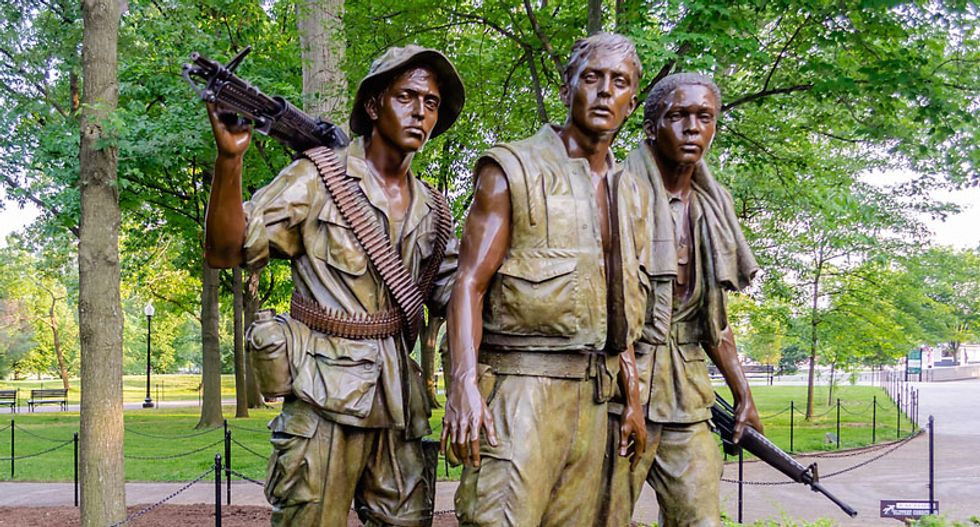 Fifty years ago this fall, in 1967, as the number of American troops in Vietnam approached half-a-million, it wasn't the Vietnam War that worried a majority of Americans when Gallup asked about the most urgent problem facing themselves and their families. It was inflation and the high cost of living. Only 5 percent cited the threat of a loved one – or themselves – going to Vietnam.

Yet Vietnam cannot be separated from the economic angst that would begin to surge through middle America in those years. The war fueled inflation, increased taxes, squeezed family budgets, and ultimately germinated the white working class resentment that five decades later thrust Donald Trump into the White House.

Arguably, we now have a President Trump because of the Vietnam War.

By the mid-1960s Americans had enjoyed nearly two decades of sustained prosperity and bullish consumption – "one of history's great shopping sprees," as one historian called it – and this overheated economy showed few signs of slowing down.

But then President Lyndon Johnson made a fateful decision.

Not wanting to reveal the extent of our involvement in Vietnam, and not wanting a debate in Congress over how to pay for it – which he feared would deprive his beloved Great Society of funding – he decided to conceal the cost of Vietnam by borrowing.

But the more Johnson pumped borrowed dollars into the war, the more it channeled investment and productivity into defense and away from the consumer economy. Soon consumer demand began to outstrip supply – and prices slowly began to rise.

Wages also rose with inflation, but for most workers they did so only annually – yet prices were increasing monthly. Mortgage rates were edging up as well. Americans still spent, but they did so nervously, worried about falling behind.

In August 1967, Johnson sent a special message to Congress warning that the growing federal deficit could precipitate a "spiral of ruinous inflation," and he called for a temporary 10 percent income tax surcharge to finance the war.

But conservatives in Congress made him pay a price: a corresponding 10 percent cut in domestic discretionary spending. To pay for the war, Johnson had to starve his Great Society. “That bitch of a war,” he lamented, “killed the lady I really loved.”

The tax surcharge did little to stem inflation. To working Americans, costs were still outpacing raises and now they were paying more in taxes. By the end of the 1960s, inflation had crept above 6 percent and mortgages were nearly double what they were just a few years before.

Taxes also weren't indexed to inflation, so the more money Americans earned through inflated wages, the more it pushed them into a higher tax bracket. The government seemed to be taking more and not giving anything back.

So the working class saw their boys, not the privileged or well-educated, head off to the jungles of Indochina. They also saw college campuses erupt with moral condemnation at the war their kids were risking their lives to fight. Gratitude and parades were scarce for returning soldiers. Even those who disliked the war disliked the anti-war movement even more.

From their perspective, their taxes were higher, their wallets were thinner, their sons were in danger, and their country was ungrateful. But with their kids overseas, they were reluctant to blame the war for their woes.

So they turned their fire elsewhere. They blamed the media which, to them, portrayed only the most negative aspects of the war. They blamed students and intellectuals for looking down on the sacrifice their kids were making.

And they blamed liberals for raising their taxes and lavishing dollars on what they deemed to be the undeserving poor – even though the Great Society itself was being starved.

To them, they were hard-working Americans who were sacrificing their sons abroad and getting squeezed at home, and all they got for it was elite condescension and a government that paid attention to everyone but them.

To be sure, Vietnam was not the sole catalyst for this emerging white working-class populism. As early as 1964, the journalist Theodore White wrote a prescient Life Magazinearticle describing a growing racial backlash among northern whites uneasy over civil rights, desegregation, urban unrest, and crime.

Many of these were New Deal Democrats who tolerated their party’s support for civil rights as long as the movement stayed south – but not when it hit their communities.

Or as Martin Luther King, Jr., said when he marched on Chicago in 1966, “I've been in many demonstrations all across the South, but I can say that I have never seen – even in Mississippi and Alabama – mobs as hostile and as hate-filled as I've seen here in Chicago.”

To Theodore White, this backlash would force the Republican Party, “born in racial strife, to choose whether it abandons its tradition and becomes the white man’s party or refreshes its tradition by designing a program of social harmony.”

But as much as civil rights roiled America, it took Vietnam to turbocharge these growing class, cultural, and economic resentments – to make them deeply personal – and they would fester in our politics for decades to come.

We are still living with the consequences today.

Leonard Steinhorn is a professor of communication and affiliate professor of history at American University, a CBS News political analyst, author of The Greater Generation: In Defense of the Baby Boom Legacy, and co-author of By the Color of Our Skin: The Illusion of Integration and The Reality of Race.