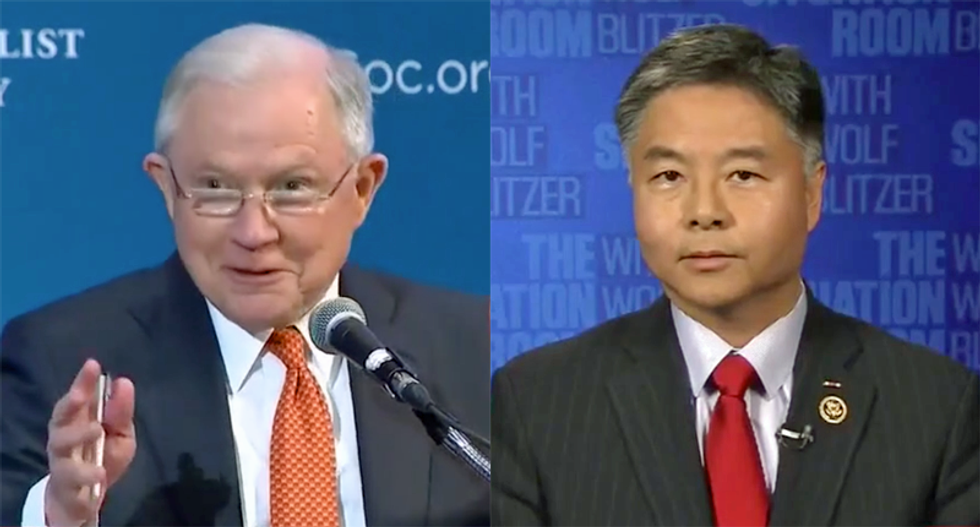 Congressman Ted Lieu explained to CNN's The Situation Room with Wolf Blitzer that Attorney General Jeff Sessions joking about a Russian spymaster during a Friday speech only goes to show how much legal jeopardy the nation's top law enforcement office faces.

"The former Russian Ambassador, Sergey Kislyak...he now says he spoke with so many Trump officials it would take him more than 20 minutes to name them all. Is he simply taunting the U.S. in that interview or could there be more contacts between the Trump campaign and Russia that haven't yet come to light?" Blitzer asked.

"It's certainly fascinating that Kislyak is now throwing Trump campaign officials under the bus," Lieu noted. "And keep in mind, he's not just a Russian Ambassador, it was widely known in U.S. intelligence circles that he is a spy and master spy recruiter for Russia."

"If you're on the campaign, why were you even dealing with all these Russian interactions? It sure set off multiple red flags, which leads me to believe that collusion went pretty high up in the Trump campaign," Lieu concluded.

"The Attorney General, Jeff Sessions, as you also saw in that report, he was over at the Mayflower Hotel in Washington today, where he had one of those undisclosed meetings with the former Ambassador Kislyak."

"But I just was thinking, you know, I should want to ask you, 'is Ambassador Kislyak in the room? Before I get started here, any Russians?" Sessions asked, during a speech to the Federalist Society.

"He was smiling, he was joking, but was that appropriate?" Blitzer asked?

"Not at all. Jeff Sessions still doesn't get it. He's not in trouble where he happened to be in places where there are Russians," Lieu reminded.

"He is in trouble because he had a nearly hour long meeting with Ambassador Kislyak -- also a spy -- and then he failed to disclose the existence of that meeting under oath to the U.S. Senate," Lieu reminded. "That's why Jeff Sessions is in trouble."