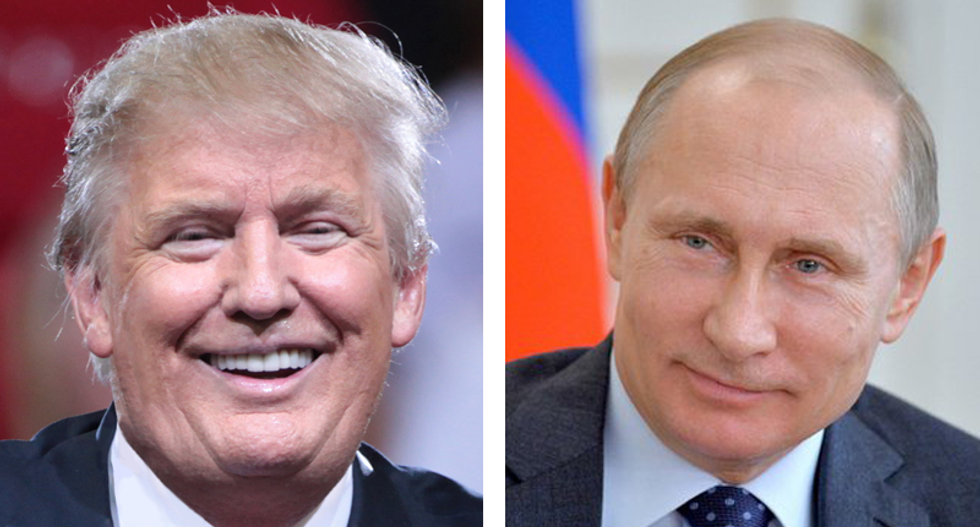 The former Moscow bureau chief for the British newspaper The Guardian revealed to NPR host Terry Gross that Soviet and Russian intelligence agencies had targeted President Donald Trump for decades.

"You write that the Russians had their eyes on Donald Trump as early as the 1970s when he married Ivana Trump, who is from Czechoslovakia. Why were they keeping an eye on him in the '70s? What were they looking for?" Gross asked Luke Harding, author of the new book "Collusion" on President Donald Trump, Russia and the dossier compiled by former MI-6 spy Christopher Steele.

"Well, the KGB really forever has been interested in cultivating people, actually, who might be useful contacts for them, identifying targets for possible recruitments possibly to be agents. That's not saying that Donald Trump is an agent, but the point is that he would have been on their radar certainly by 1977 when he married Ivana, who came from Czechoslovakia, a kind of communist Eastern bloc country," Harding explained. "And we know from Czechoslovak spy records de-classified last year that the spy agencies were in contact with Ivana's father, that they kept an eye on the Trumps in Manhattan throughout the 1980s."

The pattern could go back even further, as Raw Story reported Sunday.

"But I think what's kind of interesting about this story, if you understand the kind of Russian espionage background, is Trump's first visit to Soviet Moscow in 1987. He went with Ivana," Harding noted. "He talks about getting an invitation from the Soviet government to go over there. And he makes it seem kind of rather casual. But what I discovered from my research is that there was actually a concerted effort by the Soviet government via the ambassador at the time, who was newly arrived, a guy called Yuri Dubinin, to kind of charm Trump, to flatter him, to woo him almost."

"And Dubinin's daughter, sort of who was part of this process, said that the ambassador rushed up to the top of Trump Tower, basically kind of breezed into Trump's office and he melted. That's the verb she used. He melted," Harding repeated.

"That Trump melted when he was flattered?" Gross clarified.

"Yeah. That Trump melted with this kind of flattery," Harding replied. "And several months later, he gets an invitation to go on an all-expenses-paid trip behind the Iron Curtain to Soviet Moscow."

Harding noted the trip was arranged by Intourist, which "is basically the KGB."

Harding was expelled from Russia in 2011 for unfavorable press coverage of the Kremlin. In her intro, Gross noted that Harding "learned a lot about Russian espionage partly through his own experience of being spied on and harassed."

"And if you work your way down the list through these sort of - the KGB's personality questionnaire, Donald Trump ticks every single box," Harding concluded.

In fact, the very idea of Donald Trump running for office may have originated during his 1987 Moscow trip.

"And there's a kind of curious coda to this, which is, two months after his trip - actually, less than two months, he comes back from Moscow and, having previously shown very little interest in foreign policy, he takes out these full-page advertisements in The Washington Post and a couple of other U.S. newspapers basically criticizing Ronald Reagan and criticizing Reagan's foreign policy," Harding explained.

"He also says that he's thinking about politics, not as a senator or as a mayor, but he actually goes to New Hampshire and he actively floats the idea of running for president. It doesn't happen then, but this is in his head," Harding noted. "This is a strategic thought he has after his Moscow trip.

Decades later, the early days of the Trump administration featured many prominent members will Russia connections.

"I mean, it's - obviously, Trump did the picking, but it's almost as if Putin had the kind of last word because we've got Wilbur Ross, who as well as the Bank of Cyprus, we now know was doing business of our shipping company with Vladimir Putin's son-in-law. We have Michael Flynn, whose woes are well-known, but clearly, was taking money from Russia Today, the Kremlin propaganda channel, and other Russian interests and not declaring it," Harding reminded. "Then we have Rex Tillerson. I mean, he was a famous oil guy. I used to write about him in Moscow, and he got this Order of Friendship from Vladimir Putin - sort of a sky blue ribbon pinned to his chest. And he pops up as U.S. secretary of state almost from nowhere."

"And so we go down the list, whether it's from policy aids like Carter Page or George Papadopoulos, who's pleaded guilty to lying to the FBI, or Trump associates like Felix Sater, longtime business pal, or Michael Cohen, the personal lawyer, who's married to a Ukrainian," Harding added.

"I mean, the sort of constellation of Russian connections circling around planet Trump is just quite extraordinary. And I think this, more than anything else, is what Mueller is now looking at," he concluded.