Martha Raddatz rips Kellyanne Conway for doubting Moore accusers: 'You either believe the allegations or not' 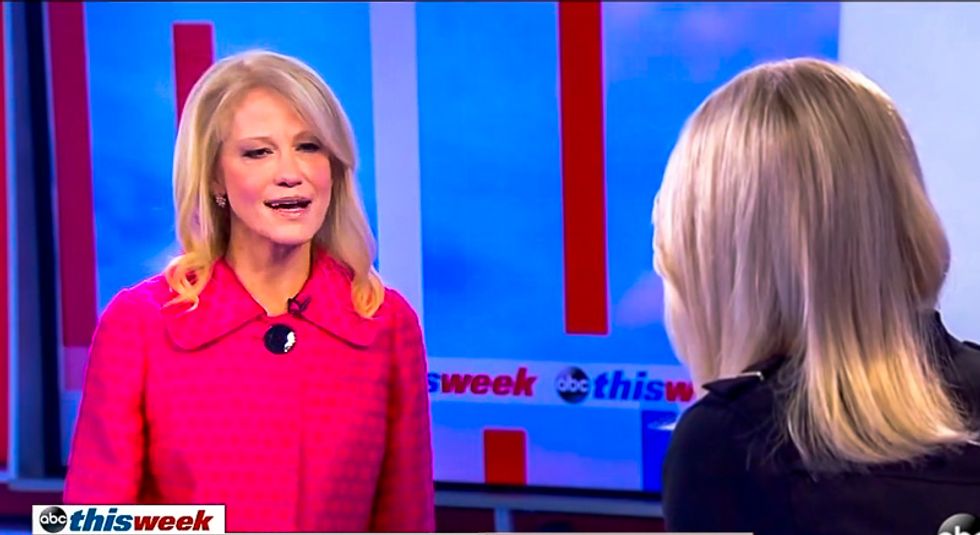 ABC's Martha Raddatz called out White House counselor to the president Kellyanne Conway on Sunday for refusing to say if she believed the women who are accusing Republican U.S. Senate candidate Roy More of sexual misconduct.

During an interview on ABC's This Week, Raddatz asked Conway if she had "any doubt about the veracity" of the claims Moore's accusers have made.

"The conduct described should disqualify anyone from serving in public office and I'll stand by that," Conway replied. "The president and others in the Republican Party have made clear that if the allegations are true, this man should step aside. But I've gone farther than that."

"But that goes back to that 'if'," Raddatz pointed out. "'If we prove this misconduct, then he should leave.' What is it that has to happen now for you to go into, 'He should step aside'?"

Deflecting the question, Conway insisted that "the president is not as focused on this as he is his major 14-day trip abroad."

"Let me ask you again," Raddatz interrupted. "Do you have any doubt about the veracity of the accusations."

"I only know what I read," Conway opined. "And I take very seriously allegations like this, particularly when they involvee someone who happens to be one of my daughter's age."

"I also want to make sure that we as a nation are not always prosecuting people through the press," she added. "He has denied the allegations. I've read the stories, I've heard -- not the testimony and the evidence -- but what people are saying publically. And I think what we all said stands."

"What do you mean the standard of proof?" Conway stated.

"I mean, what does it take for you to say, 'He should resign'?" Raddatz pressed. "What has to happen before you would advise the president to say, 'Roy Moore should step aside'?"

"He should step aside if the allegations are true," Conway said.

"Let me say again, there are four women who were named," Raddatz concluded. "And 30 women coroborating it."

"I think they did speak up," Raddtaz said.