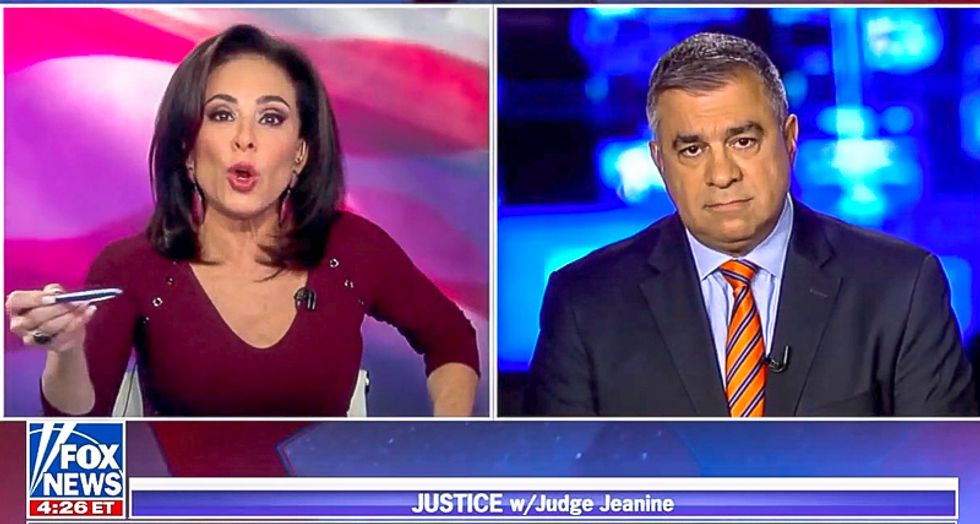 Fox News host Judge Jeanine Pirro, a stalwart defender of President Donald Trump and the Republican Party, appeared to be on the fence over the weekend about whether Alabama GOP Senate Candidate Roy Moore should drop out of the race over allegations that he sexually preyed on a 14-year-old girl.

During an interview with far-right conservative activist David Bossie, Pirro seemed to be struggling with the sexual misconduct allegations against Moore.

"Mitt Romney has actually said, 'The presumption of innocence only applies in a court of law and it doesn't really apply here," Pirro complained on her Saturday program. "I mean, how can this guy and -- if the allegations are true, I spent my career going after sexual predators and pedophiles, trust me -- but right now, it's 40 years later. I doubt that there could ever even be a charge filed here."

"The guy has been investigated a million times, Roy Moore," she continued. "Apparently more than any other candidate in Alabama. Is the Republican Party destroying itself or didn't they do enough vetting of this guy, Moore?"

For his part, Bossie suggested that the charges against Moore were invalid because they came from a supporter of Hillary Clinton, ignoring the fact that at least one of GOP candidates's accusers voted for President Donald Trump.

"I don't know the answers to those questions," Bossie admitted. "But I can say this, Judge Moore has been on the ballot many times over a long period of time. How this just miraculously comes out when this Hollywood [Harvey Weinstein] and the atmosphere that is pervasive, which is, if there's an allegation, the person is guilty."

According to Bossie, who was behind the Citizen's United Supreme Court case, "in the case of these lowlifes in Hollywood on the left, [the charges] are accurate."

"This is 40 years ago!" Pirro exclaimed.

"It's the atmosphere that we are in," Bossie replied.

"The whole thing is ugly," Pirro concluded. "And let's hope that none of it is true. If it is, it's just an example of..."

Bossie interrupted: "One of the accusers is a Hillary Clinton supporter and volunteer and was with Joe Biden. It's an interesting thing that it seems to be a Democrat [sic] activist, a leftist activist in Alabama."