Native American activist says Trump slur was ‘staged’: ‘He knew what he was doing’ 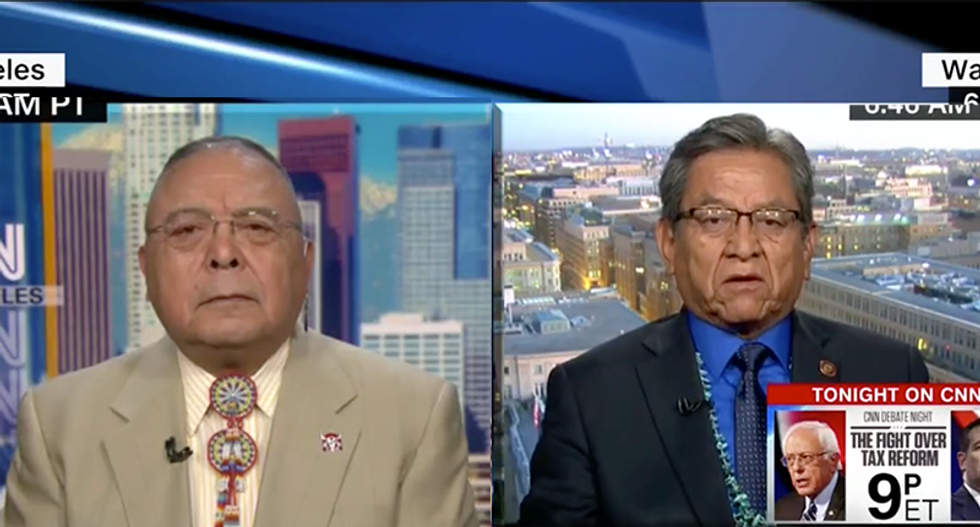 The founder of American Indians in Film and Television, Sonny Skyhawk, called out President Donald Trump’s racist attack on Native Americans as staged.

Russell Begaye, Navajo Nation president, said Trump had insulted World War II heroes. “We need to honor these war heroes, our American war heroes in a respectful way, in any situation, any circumstance, in any environment,” he said.

He went on to say that this was an excellent moment to highlight the help that the Navajo code-talkers contributed to World War II but it ended with an "unnecessary" comment. He explained that the way the word was used Monday was an ethnic slur.

"Pocahontas is a real person. It's not a caricature," Begaye explained. She played a "critical role" in the "life of this nation."  He called it outright "culturally insensitive."

Cherokee Nation Chief Bill John Baker attacked Trump last year for his use of the insult on Sen. Elizabeth Warren.

Co-host Alisyn Camerota cut in to say that Pocahontas was actually a hero not merely to Native culture but to all Americans.

Skyhawk called the event with the portrait of Andrew Jackson behind Trump "staged." He explained that Trump has been in television enough to know how to set up an event and stage a scene. He believed the Jackson portrait with the commentary was an intentional "slight." Trump has a history of attacking Native Americans, not only using  Pocahontas as a pejorative, but also in his ongoing casino battles.

"I think it was a condescending racial slur," Skyhawk continued. "Unfortunately, at an inopportune time when these heroes were being honored. It's uncalled for. Totally uncalled for. And he knew what he was doing."

Skyhawk said that there is no doubt in his mind that Trump knows the history of Andrew Jackson and the Trail of Tears.

"Of course he knows Andrew Jackson," Skyhawk said. "Andrew Jackson is one of his heroes. He acts like him. He talks like him. I mean, he wants to be him in modern day. But, again it was totally uncalled for." He went on to say that it was especially inappropriate given that neither Warren nor Pocahontas had anything to do with what they were talking about Monday. "To slur the code-talkers or any Native person is totally uncalled for."