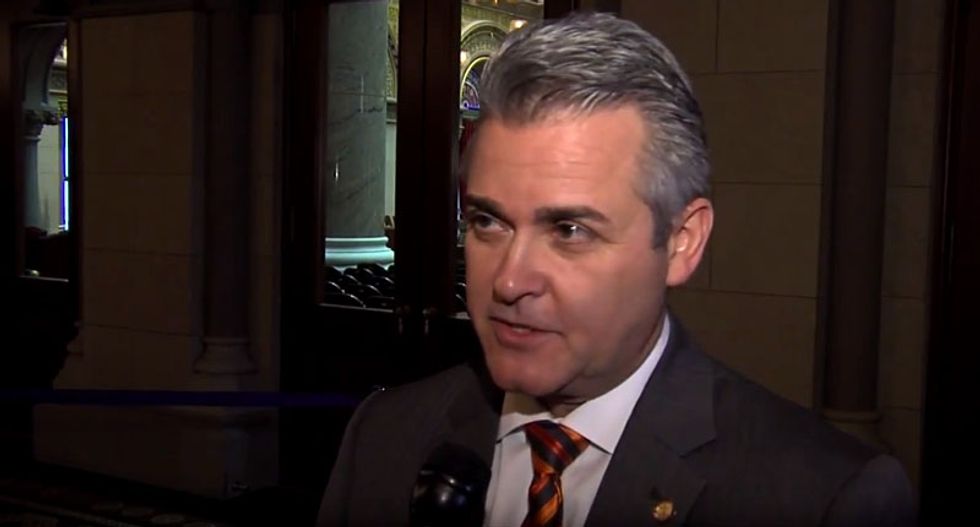 A Republican lawmaker in New York has been sanctioned over workplace harassment. Assemblyman Steve McLaughlin is now prohibited from having interns working in his office.

The sanctions were handed down Wednesday morning, according to the Albany Times Union, after an investigation by an independent counsel.

McLaughlin fell under investigation after making offensive lewd comments to a female employee.

Earlier this year, audio recordings emerged of the lawmaker berating one of his female aides, describing her as "vicious c*nt" -- among other things.

"You’re still fat. You are not attractive — and you’re a f*cking awful human being," McLaughlin says in one recording.

He claimed the recordings were part of a smear campaign in the race for Rensselaer County executive. But McLaughlin said he had apologized to the aide, who was not named in news reports.

"[The aide] and I have worked together for seven years, and she continues to be a member of my staff,” he said. “Like many co-workers, we have had arguments. During our time working together, I have wrongly said things to her, and have apologized to her for statements I made to her."

Assembly Speaker Carl Heastie outlined the sanctions in a statement: "A letter of admonition be issued publicly to Assemblymember McLaughlin by the Speaker on behalf of the entire Assembly, enumerating the findings of the Committee and stating that Assemblymember McLaughlin's conduct violated the Assembly's Policy Prohibiting Harassment, Discrimination and Retaliation as it pertains to sexual harassment and confidentiality, and is consistent with the standards of conduct to which Members of the Assembly should be held;

Assemblymember McLaughlin be directed to cease revealing the name of the complainant and details of the allegations and investigation;

Assemblymember McLaughlin be precluded from having any interns working in his Assembly or district office, and that the prohibition applies to interns assigned by the Assembly as well as any interns that might be engaged through unofficial channels; and

Assemblymember McLaughlin be required to reimburse the Assembly for the cost of the comprehensive supplemental sexual harassment and retaliation prevention training he took in July 2017."