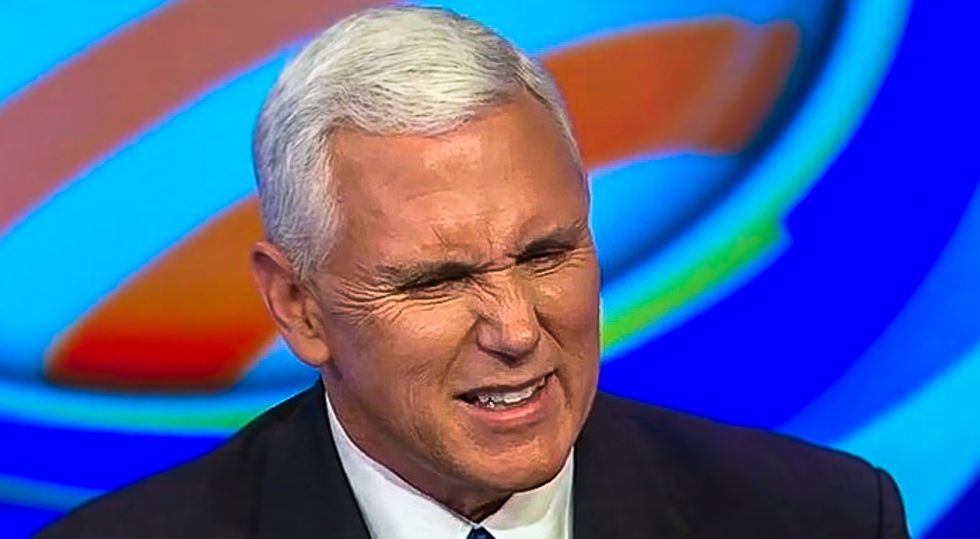 Among the revelations in Julia Ioffe’s bombshell report for the Atlantic alleging that Donald Trump’s eldest son, Donald Trump Jr., corresponded with WikiLeaks over the course of 10 months, is the unfortunate timing of a blanket denial of any collusion between the campaign and WikiLeaks by now-Vice President Mike Pence.

As BuzzFeed’s Chris Geidner notes, on Oct. 14 2016, Pence appeared on Fox and Friends to dispel and questions about the Trump campaign’s communications with WikiLeaks, an organization which Trump’s own CIA Director Mike Pompeo has labeled a “hostile intelligence service.”

“Some have suggested on the left that all this bad stuff about Hillary, nothing bad about Trump, that your campaign is in cahoots with WikiLeaks,” Fox & Friends’ Steve Doocey told Pence that October morning.

“Nothing could be further from the truth,” Pence replied. “I think all of us have had concerns about WikiLeaks over the years and it’s just a reality of life today.”

“Here you see the national media chasing after unsubstantiated allegations—allegations that Donald Trump has categorically denied—and ignoring hard evidence, documented evidence, of deeds by the Secretary of State,” the future VP argued.

That same day, Trump Jr. sent out a link to a WikiLeaks search specifically referenced in an Oct. 12 direct message from the “transparency organization” to Trump’s eldest son.

“Strongly suggest your dad tweets this link if he mentions us,” WikiLeaks wrote to Trump Jr. “There’s many great stories the press are missing and we’re sure some of your follows [sic] will find it. Btw we just released Podesta Emails Part 4.”

For those who have the time to read about all the corruption and hypocrisy all the @wikileaks emails are right here: https://t.co/SGcEeM9rCS
— Donald Trump Jr. (@Donald Trump Jr.)1476452088.0

Further complicating Pence’s statement to Fox & Friends is this detail from Ioffe’s report:

“According to a source familiar with the congressional investigations into Russian interference with the 2016 campaign, who requested anonymity because the investigation is ongoing, on the same day that Trump Jr. received the first message from WikiLeaks, he emailed other senior officials with the Trump campaign, including Steve Bannon, Kellyanne Conway, Brad Parscale, and Trump son-in-law Jared Kushner, telling them WikiLeaks had made contact. Kushner then forwarded the email to campaign communications staffer Hope Hicks.”

As far as Pence’s Oct. 14 blanket denial of coordination between WikiLeaks and the Trump campaign? “Nothing could be further from the truth.”

Watch Mike Pence below, via Fox News (statement begins around the 8:35 mark):