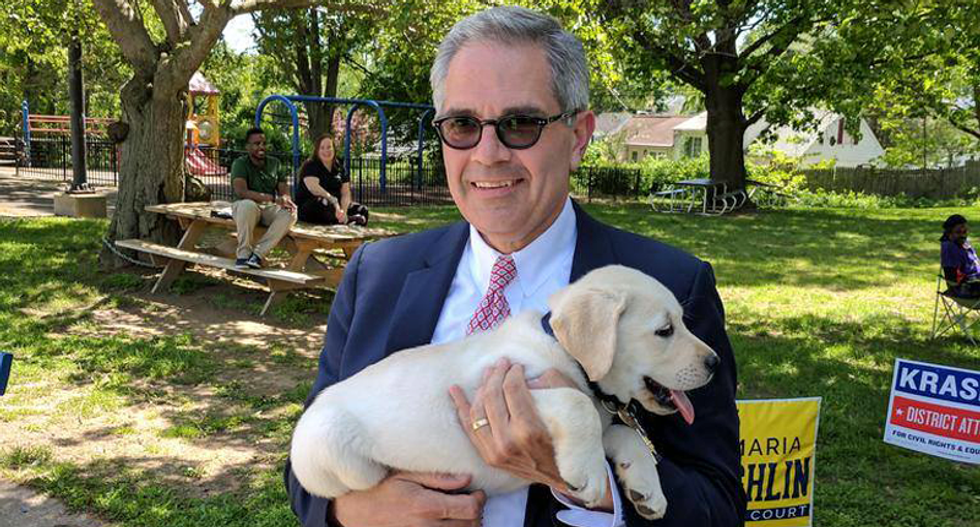 Larry Krasner, who strikes fear into the armed ranks of the Philadelphia Police Department, seen campaigning with a puppy. (Facebook)

Civil rights lawyer Larry Krasner is the target of a temper tantrum by Philadelphia Police who are angry voters ignored fear-mongering from the police union and elected Krasner in a landslide victory, The Philadelphia Inquirer reported.

About 300 members of the Fraternal Order of Police, Lodge 5, unanimously endorsed Republican nominee Beth Grossman. The police union also donated $12,500 and issued an October letter accusing Krasner of "an open hostility against police and law enforcement in general."

“He doesn’t give me my arrest powers so [I] don’t care. No blood on my hands when he lets the sh*tbags out," Officer Marc Marchetti reportedly posted on Facebook.

“Hitler could run for DA or Mayor on the Democratic ticket and win," another commenter responded.

“He’s got that look on his face you just wanna wipe off with a b*tch slap," Officer Steve Mancuso posted. The Inquirer noted, "Mancuso has been accused of such rough handling, in a 'violent takedown' of an Eagles fan during a game; the case was settled out of court."

Krasner has shrugged off the post-election attacks and is focusing on his transition before taking over the office of 300 attorneys and a budget of over $50 million.

"The coming year will bring a shift in priorities. The Philadelphia District Attorney’s Office will transition from a culture of seeking victory for prosecutors to a culture of seeking justice for all," the transition explained. "The next District Attorney looks forward to working with the many current staff members who are also dedicated to this vision, and with the best and brightest talent drawn from local and national pools."