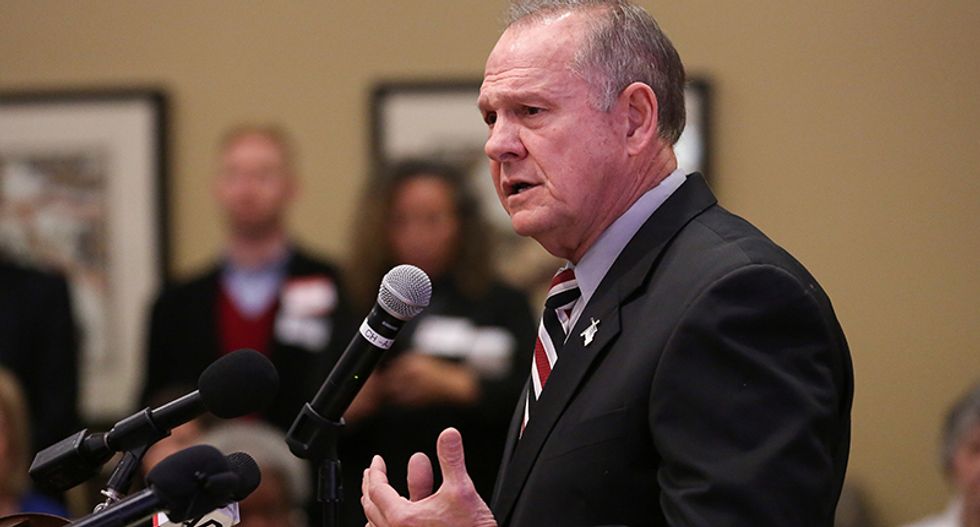 U.S. Senate Majority Leader Mitch McConnell said on Tuesday that he wanted to work with the White House to explore ways to keep embattled Republican Senate candidate Roy Moore from taking office if he wins a special election in Alabama.

Speaking to reporters at the U.S. Capitol, McConnell said he had been in contact with President Donald Trump and others about sexual misconduct allegations against Moore.

"He's obviously not fit to be in the United States Senate," McConnell said, "and we've looked at all the options to try and prevent that from happening."

Five women have accused Moore of sexual misconduct stemming from when he was in his 30s and they were teenagers. Moore, now 70, has denied the allegations.

Trump returns to Washington on Tuesday evening from a 12-day trip to Asia, and McConnell said he planned to discuss Moore's situation with the president. Both are Republicans.

Trump supported Moore's opponent, Luther Strange, in the Republican primary but threw his support to Moore after Strange was defeated.

McConnell said Republicans were still considering having a candidate launch a write-in campaign against Moore for the Dec. 12 special election. Speculation has centered on Strange and the current U.S. attorney general, Jeff Sessions, as possibilities.

McConnell said later in the day that Sessions, who left the Senate seat to become attorney general, would be a plausible write-in candidate.

"He fits the mold of somebody who might be able to pull off a write-in," the majority leader said during a forum on the economy.

A Democratic win in Alabama would be a blow to Trump's agenda and shift the political outlook for next year's congressional elections, giving Democrats a stronger shot at recapturing control of the Senate.

Under state law, Moore cannot be removed from the ballot.

"Obviously this close to the election, it's a very complicated matter," McConnell said earlier.

Moore has suggested that McConnell and other establishment Republicans were working in tandem with news media to discredit him.

After McConnell's remarks, Moore responded by tweeting: "The good people of Alabama, not the Washington elite who wallow in the swamp, will decide this election!"

McConnell urged Moore on Monday to leave the race, while Senator Cory Gardner, who chairs the Republican Party's Senate campaign arm, suggested the Senate should expel Moore should he continue campaigning and win.

The Republican National Committee has withdrawn its support for Moore, according to a Federal Election Commission filing on Tuesday, after the party's Senate campaign wing, the National Republican Senatorial Committee, ended a fundraising deal with him on Friday.

In Birmingham, Alabama, Jones told reporters his campaign had no plans to directly attack Moore over the allegations in a bid to capitalize on the furor.

Jones' campaign released a new ad on Tuesday featuring Republican voters who say they are backing the Democrat.

The national Democratic Party, however, has yet to invest directly in the race beyond funds to build the state party, and has not changed that stance since the Moore allegations surfaced.

Earlier in the day, Sessions said in testimony before Congress that he had no reason to doubt the five women who have accused Moore of misconduct when they were in their teens.

The House of Representatives' top Republican, Speaker Paul Ryan, said he believed Moore's accusers and that Moore should leave the race.

"If he cares about the values and people he claims to care about, then he should step aside," Ryan told a news conference.

On Monday, Beverly Young Nelson became the fifth woman to accuse Moore of misconduct, saying he sexually assaulted her when she was 16 and he was a prosecuting attorney in his 30s.

Moore said on Monday that Nelson's accusations were "absolutely false."

Moore has denied the allegations first raised in a Washington Post story about his relationships with four women when they were teenagers, including a charge he initiated sexual contact with a 14-year-old girl when he was in his 30s.

Reuters was unable to independently confirm any of the allegations and accusations.