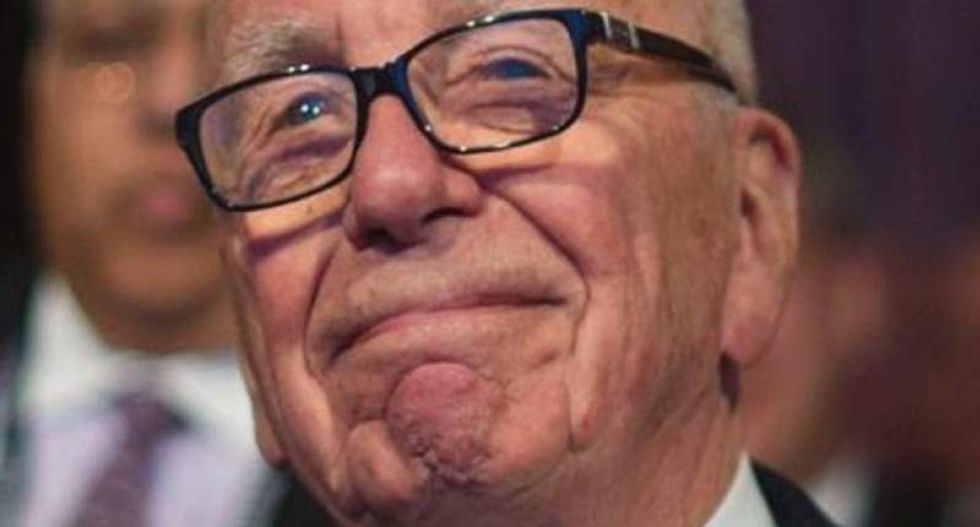 CEO and founder of News Corporation Rupert Murdoch is pictured on Nov. 19, 2013 (AFP)

According to one of the sources, the 86-year-old executive chairman of Twenty-First Century Fox Inc <FOXA.O> offered to buy CNN in both conversations.

Another source said Murdoch had "zero interest" in owning CNN.

U.S. Department of Justice staff have recommended that AT&T sell either its DirecTV unit or Time Warner's Turner Broadcasting unit - which includes CNN - a government official told Reuters on Thursday, in order to gain antitrust approval.

On Thursday Stephenson said he had no interest in selling CNN and that he was ready to defend the deal in court if necessary.

According to one of the sources on Friday, Murdoch called Stephenson twice, unprompted, on May 16 and Aug. 8 and on both occasions asked if CNN was for sale. Stephenson replied both times that it was not, according to the source.

The fate of CNN has broader political significance. U.S. President Donald Trump has repeatedly attacked the network for its coverage of his campaign and his administration, while he has publicly praised Murdoch's Fox News.

In the run-up to last year's election he vowed that as president his Justice Department would block AT&T's purchase of Time Warner. He has not commented on the transaction since taking office in January.

Trump's comments have provoked concern that he may improperly influence the U.S. Department of Justice to block the deal. The White House has said Trump has not spoken to the attorney general about the matter.

Nevertheless, a group of eight Democratic U.S. senators on Friday wrote to Makan Delrahim, head of the Justice Department's antitrust division, urging the department "to oppose any attempt by the White House to interfere with antitrust law enforcement decisions, particularly for political reasons."

Delrahim said he had not had any contact with the White House or the attorney general on the matter, speaking at an event at the USC Gould School of Law in Los Angeles later in the day.

"I’ve got to keep my nose down and be a law enforcer and do what’s good and what I’ve committed to doing to the American people," said Delrahim.

But he appeared to voice doubts about AT&T's reasoning that the purchase of Time Warner would not result in a company with too much power because the combined company would have to compete with powerful new online rivals such as Amazon.com Inc <AMZN.O>, Netflix Inc <NFLX.O> and Facebook Inc <FB.O>.

Delrahim referred to a comment by former President Ronald Reagan that "the nine most terrifying words in the English language are: I'm from the government and I'm here to help."

"I’d say you should be equally terrified when someone in an incumbent company, whatever industry, comes to you and says I’m here to help you against the evils of Netflix, Amazon, Google and Facebook," said Delrahim. "Some of these pro-competitive comments and justifications remind me of that quote strongly."

It would not be the first time Murdoch has attempted to take control of CNN.

His Twenty-First Century Fox made an $80 billion offer for Time Warner in 2014 but abandoned the plan in the face of Time Warner's resistance. At that time, Fox had planned to divest CNN - which competes with Fox News - in order to avoid antitrust issues.

There is no law against a company owning two cable networks, but there is a Federal Communications Commission prohibition on owning two broadcast networks. A Fox deal with CNN could also raise antitrust concerns because of the market share that a combined company would have among cable news viewers.

"I have been called and asked if I would sell CNN by numerous people," Stephenson told the New York Times DealBook conference on Thursday. But he added: "Selling CNN makes no sense."

Fox has held talks in the last few weeks to sell most of its film and television assets to Walt Disney Co <DIS.N>, CNBC reported this week, which would leave the company with its Fox News, sports programming and broadcasting stations..

Twenty-First Century Fox would sell its stake in European satellite broadcaster Sky Plc <SKYB.L> in a deal with Disney, according to CNBC's report. Fox is trying to buy the 61 percent of Sky it does not already own but the bid is strongly opposed by some lawmakers and has been subject to lengthy regulatory scrutiny.