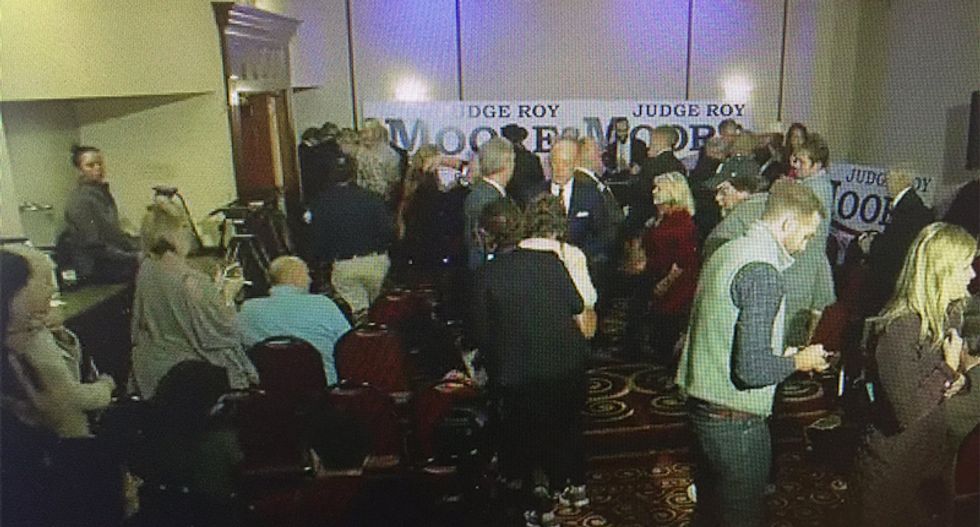 After Roy Moore took the stage in Alabama to claim he wasn't stepping down from his campaign, his supporters filed out of the room, passing reporters as they went. That's where the altercations began.

According to BuzzFeed, the event planner told reporters that organizers "have requested no questions about any of the allegations." At the time, the reporters were sitting among the supporters in chairs in the small room. When the question and answer part of the rally came, Moore sat down and Faith2Action president Janet Porter stood at the podium to answer questions.

A CNN reporter was first to inquire whether or not Moore had touched any of the women accusing him of sexual harassment. Moore supporters lost it.

“He’s already answered that,” one shouted.

The second reporter asked a similar question and again the supporters went nuts. Both Moore and his wife Kayla simply stood up and left, and the press conference ceased.

“You were told not to ask about that,” one Moore supporter shouted at the CNN reporter.

“You make me sick,” said one woman said to the reporter as she left.

Outside the room in a hallway, cameras and reporters surrounded former Senate and presidential candidate Alan Keyes, who now serves as the chair of Renew America, a blog site which claims to be "a grassroots organization."

As Moore supporters walked by they shouted at the cameras as well.

“You did not have the decency to abide by the rules that we established for you to come here and record our conference,” Pastor Stephen Broden told reporters.

Evangelical leader Flip Benham said that the camera should show the reporters because they looked "smug" and were "frothing at the mouth" over the allegations against Moore.