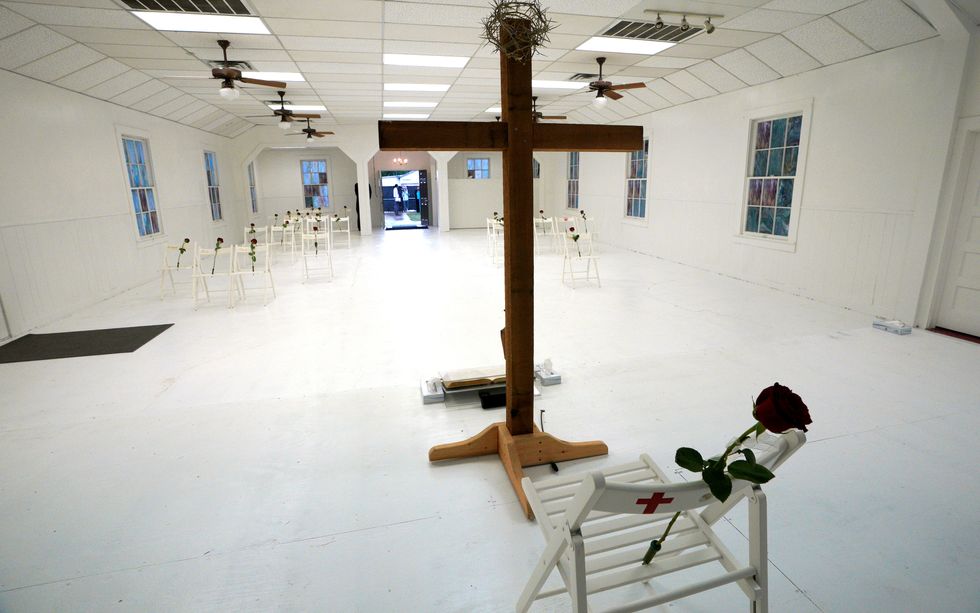 A chair and roses shows where Karla Holcombe was found dead at the First Baptist Church of Sutherland Springs where 26 people were killed one week ago, as the church opens to the public as a memorial to those killed, in Sutherland Springs, Texas, U.S. November 12, 2017. REUTERS/Rick Wilking

Joe Holcombe and his wife, Claryce, lost eight members of their family in the Texas church shooting last Sunday, including their son, grandchildren, a pregnant granddaughter-in-law and a great- granddaughter who was still a toddler. But they are serene.

“It’s just not a problem to us,” said Holcombe, 86, adding that he and 84-year-old Claryce believe their dead family members are now alive again in heaven.

“We know exactly where the family is, and it’s not going to be long until we’ll both be there," he said. "And we’re really sort of looking forward to it."

The Holcombes were upbeat and full of good humor during a telephone interview, and they are not an exception in this deeply evangelical part of Texas.

What is so striking about relatives and friends of the 26 victims of the church shooting in tiny Sutherland Springs is that they all believe good will come from this act of evil and that their loved ones are now safe for eternity, and breathing again, with God.

Psychologists say such deep faith can help families deal with such a ghastly event. Even so, they warn that leaning too heavily on one’s religious beliefs can stunt the natural grieving period and result in post-traumatic stress later.

“I can see potentially it could be some form of denial, a delayed traumatic reaction, and if you don’t have some kind of negative feelings, it can catch up with you,” said clinical psychologist and trauma expert Bethany Brand.

Gina Hassan, a psychologist in northern California, said Sutherland Spring’s faith was invaluable in the wake of the shooting, "but if it’s relied upon in a rigid way, then it’s going to be a problem down the line and come back to bite you later on.”

Local veterinarian George Hill, a relative of the Holcombes, said an evangelical belief in Christ was the only way to deal with such a tragedy.

“We haven’t lost hope," he said. "They are not gone. They are just gone ahead. And we know we’ll see them again.”

He expressed faith that evil would not prevail. "It looks like evil won, but it didn’t," he said. "Good is going to win.”

Pastor Mike Clements of the First Baptist Church in Floresville, a small city 14 miles from Sutherland Springs, is officiating over the funeral services for the extended Holcombe family on Wednesday.

The dead include Bryan Holcombe, Joe and Claryce Holcombe’s son, and his wife Karla. Their son Danny Holcombe was killed as well, along with his 18-month-old daughter, Noah. Crystal Holcombe, who was 18 weeks pregnant, was Bryan and Karla Holcombe’s daughter-in-law.

Also shot and killed were Emily, Megan and Greg Hill, three children from Crystal's first marriage, which had ended with her husband's death.

Under Texas law, Crystal’s unborn child is also being counted as a victim, making a death toll of nine for the family.

People in Sutherland Springs are truly grieving, Clements said. But evangelicals accept Christ into their lives in a very real way, and because of that, their faith is incredibly liberating, especially at a time of such great tragedy.

Most fundamentally, he said, they believe people who have accepted Christ will go to heaven.

“It doesn’t get any better than this,” Clements said over lunch near his church. “There is nothing better than heaven when you are a believer.”

(This story has been corrected in paragraph 14 to show the children were Crystal Holcombe's, not Karla Holcombe's. Also clarifies that Crystal was left a widow after her first marriage.)