The right's latest attempts to hijack and abuse Christianity 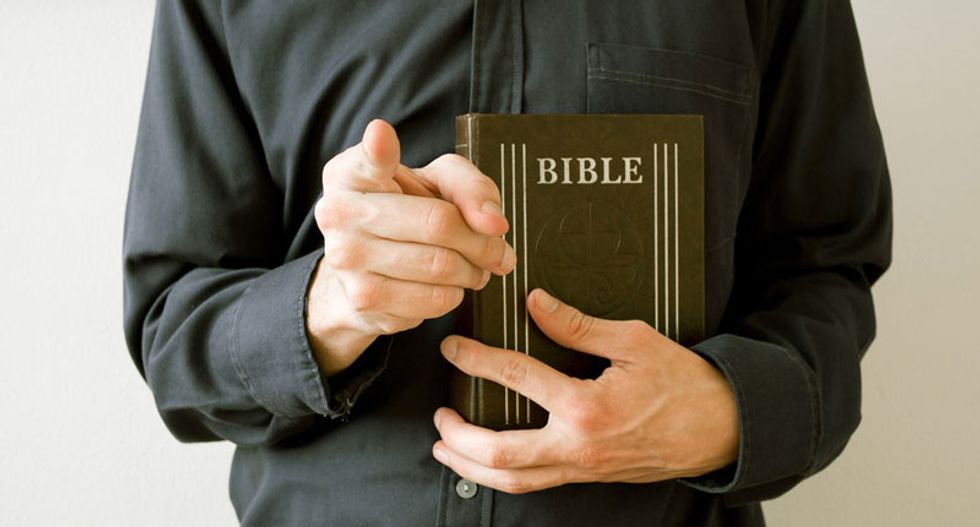 In Babylon-on-the-Potomac recently, the brand new, $500 million Museum of the Bible had its grand opening. Donald Trump did not attend, perhaps fearing a fate like the end of Raiders of the Lost Ark when the remnants of the Ten Commandments are unsealed, holy mayhem ensues and miscreants melt like candles.

Just a couple of blocks from Capitol Hill, the museum sprawls across eight floors and 430,000 square feet, giving visitors a chance to meet New Testament re-enactors, see a burning bush and Bibles that belonged to Babe Ruth and Elvis, walk through a replica of a village from the time of Christ, experience a motion ride called Washington Revelations and grab a snack at the Milk and Honey café (There’s also a cafeteria-style restaurant called, you guessed it: Manna).

At the gift shop, you can buy key chains, hats and T-shirts, frankincense and myrrh body wash, a $1,250 leather foot stool shaped like a rhinoceros (because rhinos were on Noah’s Ark, of course) or a $125,000 bejeweled pomegranate made of Jerusalem stone (the Song of Solomon: “I would give you spiced wine to drink from the juice of my pomegranates”).

As the old joke goes, this is what God would do if He had money.

To be fair, by most accounts, the museum is well designed and executed, high tech and state-of-the-art. Philip Kennicott, art and architecture critic for The Washington Post, wrote, “What it does well, it does as well or better than any museum in the country,” but added:

There… is a lot of slippage between [the museum’s] claims that the Bible is enormously influential (which is indisputable) and that the stories it tells are fundamentally true (a claim disputed not just by atheists, agnostics, secular scholars and scientists, but also by billions of adherents of the world’s other religions). Every resource of museum design and careful argumentation has been mustered to sweep up these unrelated ideas in one, big, overwhelming package.

What has many observers far more concerned are connections among the new attraction’s principal funders and the right wing. Here its mission becomes suspect, more political than religious, although with the right wing, it is always difficult to separate the two, each possessing a will to dominate. The Post describes a tangled relationship between the nonprofit museum, its corporate backer Hobby Lobby — the very rich, closely held craft store chain controlled by the Christian conservative Green family — and another principal backer the National Christian Foundation, a donor-advised fund “that supports key soldiers in the national battle for conservative Christian values.”

The foundation, self-mandated to “advance God’s kingdom,” has given millions to churches and others, counting among its grantees opponents of abortion and same-sex marriage. As for the billionaire Green family, their craft-store empire gained notoriety when it won a Supreme Court ruling allowing it to deny on religious grounds Obamacare coverage of contraception for its employees. Oh, and just in case you haven’t heard, they recently were fined $3 million in fines and forced to turn over thousands of antiquities smuggled out of Iraq. (Down goes one of the commandments — see Deuteronomy 5:19.)

Those involved claim that the museum’s purpose simply is to expose visitors to the story of the Good Book and that its motives are nonsectarian and apolitical. Sure. But the opening gala was held at the Trump International Hotel on Pennsylvania Avenue. The cheapest ticket was $2,500 and apparently no collection plate was passed for the hungry and homeless, on the grounds, we presume, that it would be an unfair tax on the rich. Organizers claim that the choice of a venue had all to do with finding an available space large enough and nothing to do with currying favor with the owners of the inn.

Hobby Lobby CEO David Green backed Marco Rubio’s 2016 presidential candidacy but endorsed Trump in the general election, and his son, museum chair and Hobby Lobby president Steve Green, recently told the Christian Broadcasting Network, “We are seeing that the current administration with President Trump is a friend of religious freedom and has taken steps to strengthen and confirm that we are a nation that values the freedoms our founders gave us.”

Really? Trump? A friend of religious freedom? Why, according to televangelist and Trump buddy Paula White, he’s a man whose election kept us from being “on the verge of losing what we call religious liberties.” Without him and the prayers of believers, she said, “I believe the church in America would have been an underground church in five years.”

Whoa! Donald Trump, the savior of oppressed Christians whom Democrats otherwise would have banished to caves and dungeons, or fed to lions in the Coliseum? Apparently for Paula White and the like-minded, the first commandment — forbidding the worship of false gods — must be provisional. And to them, what Jesus told his followers — “Render to Caesar the things that are Caesar’s, and to God the things that are God’s” — presents no hard choice, because Trump is one and the same.

Yes, they cheered the man who said he had never needed to seek forgiveness, who reportedly cheated his contractors and vendors, who wants to slash programs for the poor and cut taxes for the rich, who plans to kick thousands of disaster and political refugees out of the country, who ignores famine in foreign lands, who wants to eradicate rules and regulations protecting the water and air of God’s green earth and who has surrounded himself with crony capitalists, grifters and predators. The man who scorns and dismisses allegations of his own sexual misconduct (See Deuteronomy 5:18) while calling for the election to the US Senate of Roy Moore, the pistol-packing, homophobic, God-fearing demagogue who by many accounts lusted after teenagers and asked them out on dates. This to the applause of some of Alabama’s loudest Bible thumpers.

Speaking on an Alabama radio station, here’s how right-wing, anti-gay pastor Flip Benham justified Moore’s alleged predilection for teens: “He did that because there is something about a purity of a young woman, there is something that is good, that’s true, that’s straight and he looked for that.” A sentiment like that may be what prompted Walt Whitman to write: “‘O Bible!’ Say I, ‘What follies and monstrous barbarities are defended in thy name!’”

And here’s pastor Earl Wise from Millbrook Alabama, a Moore supporter who told the Boston Globe, “How these gals came up with this, I don’t know. They must have had some sweet dreams somewhere down the line. Plus, there are some 14-year-olds, who, the way they look, could pass for 20.”

“Not versions, but perversions,” said St. Jerome of the Bibles in his day.

One trembles at the numbers of right-wing Christians who resort to the Bible as if it were the Republican Party platform, who in their pursuit of reactionary and bigoted rectitude embrace Trump and his GOP allies no matter how reprehensible their behavior; who, like Trump mouthpiece Kellyanne Conway, seem to find it preferable to have a purported molester like Moore elected to the Senate than a Democrat, and who quote scripture to overlook — even justify — Moore’s sins, going so far as to cite biblical references to the age difference of Joseph and Mary to give their candidate the all-clear.

All of this skin-crawling rationalization just to hold onto a single Republican seat in the Senate? Yes, because they can count on Moore to continue demonizing their gay brothers and sisters, to invoke the police powers of the state to force women to carry unwanted pregnancies, to cut taxes for rich donors and give churches the right to collect money from secret sources to carry on political activities without losing their tax-exempt status (it’s in the tax bill now before Congress; check it out).

In the words of historian of religion Randall Ballmer, “You have a movement that has so totally embraced a particular political party that it’s willing to go along with any outrage as long as it’s within the tent of party.”

Fortunately, there are Christians who say no. In Alabama itself, dozens of pastors signed a letter condemning Moore. It reads, in part:

Even before the recent allegations of sexual abuse, Roy Moore demonstrated that his extremist values and actions are not consistent with traditional Christian values or good Christian character. He and politicians like him have cynically used Christianity for their own goals. But Roy Moore does not speak for Christianity, and he acts in ways that are contrary to our faith.

To which North Carolina’s Rev. Dr. William Barber II, president of Repairers of the Breach, says amen. He deplores the fact that religious values “have been hijacked by extremists” who no more represent Jesus “than did the church authorities who backed slavery.”

Woe to those who make unjust laws, to those who issue oppressive decrees, to deprive the poor of their rights and withhold justice from the oppressed of my people, making widows their prey and robbing the fatherless. What will you do on the day of reckoning, when disaster comes from afar? To whom will you run for help? Where will you leave your riches?

Go to the Museum of the Bible in Washington. You can look it up.