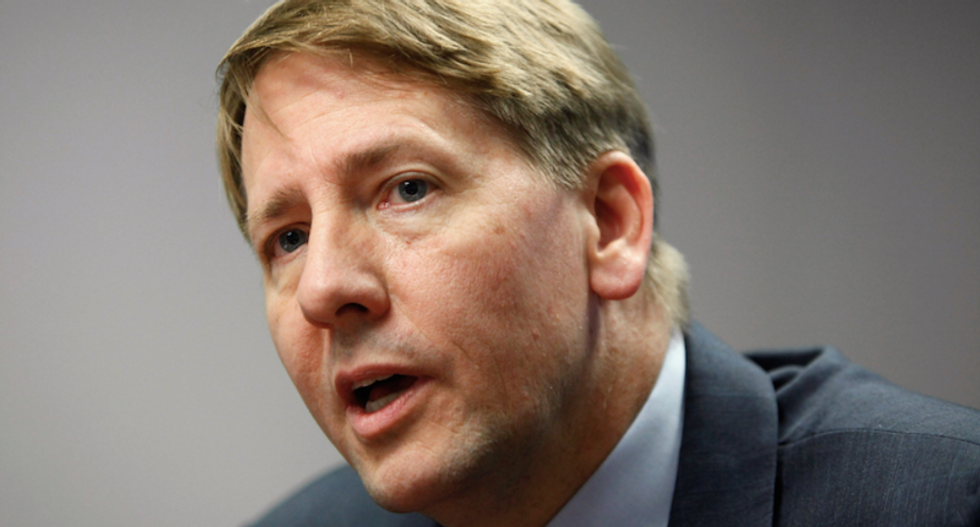 As we enter the last weeks of 2017, a major controversy has arisen over the appointment of a Director of the Consumer Financial Protection Bureau (CFPB), between outgoing Director Richard Cordray and President Donald Trump.

The CFPB was created by Congress in 2010, based on the hard work and commitment of Elizabeth Warren, to promote consumer protection in the financial sector, with jurisdiction over banks, credit unions, securities firms, payday lenders, mortgage servicing operations, foreclosure relief services, debt collectors, and other financial companies operating in the United States.  It was created by the Dodd-Frank Wall Street Reform and Consumer Protection Act, a legislative response to the financial crisis of 2007-2008, and the subsequent Great Recession.  It was established as an independent agency, but with its status being reviewed by the US Court of Appeals.  Its priorities are mortgages, credit cards, and student loans.

The Trump Administration has made clear that it wants more control over the CFPB, including prohibiting publication of consumer complaints to the public, and now is engrossed in a battle over the replacement for Cordray, who resigned last week, but appointed Leandra English as deputy director, with the power of Acting Director.  This was followed by Donald Trump announcing a challenge to the appointment, with his selection of Nick Mulvaney, the incumbent Director of the Office of Management and Budget, as his choice for Acting Director.

Therefore, a confrontation is now evident, as to whether the President can appoint someone who clearly has the same goal of destruction of the CFPB that he has, instead of leaving it to Congress to decide whether to abolish the agency, dramatically change its purpose, or decide the method of selecting a successor to its leadership.

This controversy reminds us of the controversy over whether President Andrew Johnson in late 1867 and early 1868 could dismiss the sitting Secretary of War, Edwin Stanton, because of ideological disputes over Reconstruction policy, and replace him with Ulysses S Grant first, and then when Grant backed down on the offer, Lorenzo Thomas, therefore defying the Radical Republican controlled Congress, which had passed the Tenure of Office Act of 1867. This law prevented the removal of the Secretary of War without Senate approval.

The law was passed over the President’s veto in March 1867, and was in effect until 1887.  But Johnson moved ahead to dismiss Stanton and appoint Thomas as his replacement in the cabinet. So it became both a constitutional and political controversy, helping to lead to the decision of the hostile House of Representatives to impeach Johnson in February 1868, and the resulting Senate impeachment trial from March to May 1868.

The major point of the Johnson impeachment trial was that the President had violated this law, which in reality was clearly an unconstitutional law. Going back to George Washington Presidents had always had the right to dismiss any cabinet officer they wished.  Johnson was also criticized for his confrontational and often abusive invective toward specific members of Congress, and this was simply used as another justification of the impeachment charges. But the real issue became whether Johnson had indeed violated this particular law.

The reality was that the wording of the Tenure of Office Act indicated that the President could not dismiss anyone he had appointed to the cabinet without Senate approval, but Edwin Stanton had been appointed by Abraham Lincoln, and was, therefore, a carryover from an earlier administration, not an appointment made by Johnson.  That, and the political courage of seven Republican Senators, who realized the lack of justification of impeachment, saved the day, and Andrew Johnson was found not guilty by a vote of 35-19, one vote short of the two-thirds required to remove a President from office under the Constitution.

Fifty eight years after the impeachment trial, the Tenure of Office Act was declared unconstitutional, as the Supreme Court in a related case brought in 1926, Myers V. U.S., stated that the President has the sole authority to remove executive branch officials.  Whether that ruling will be upheld in a court case about the CFPB under Donald Trump is now the center of attention, and will engender a lot of controversy in the coming months, as we enter 2018, with Trump under fire on many fronts, with critics believing that he has abused his powers, presently being investigated by Special Counsel Robert Mueller.