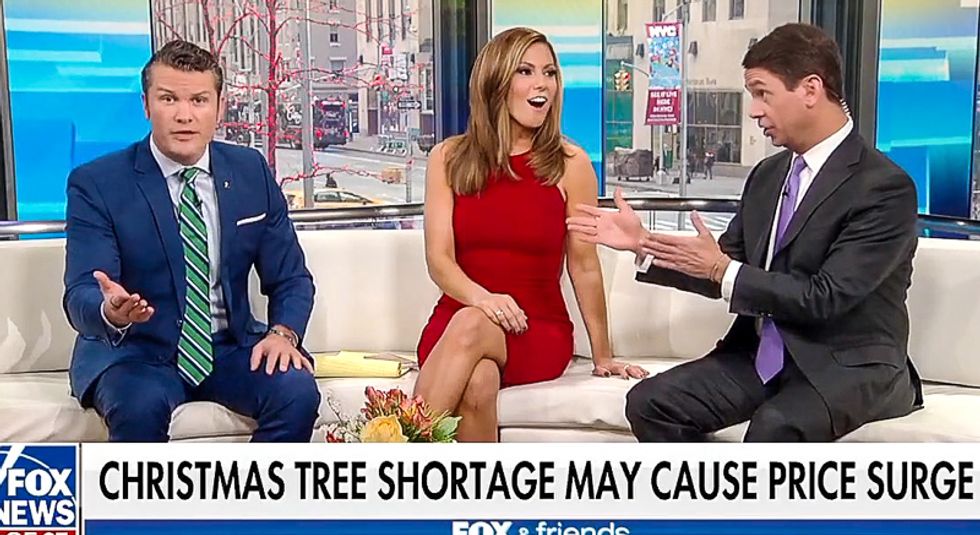 The hosts of Fox & Friends complained on Sunday that the economic collapse under President George W. Bush had created a shortage of Christmas trees -- but host Lisa Maria Boothe insisted that trees should be purchased at any price because it's not possible to "put a price tag on Christmas."

On Sunday's edition of Fox & Friends, co-host Pete Hegseth noted that the there was a shortage of Christmas trees because fewer had been planted after the economic crisis that occurred at the end of Bush's second term.

"There is a nationwide Christmas tree shortage," Hegseth explained. "Apparently, 10 years ago during the financial crisis, during the downturn, there were less trees planted. It takes about 10 years for a tree to be chopped down and put in your living room. Because of that shortage -- basic supply and demand tells us that if you have less of it, it's going to cost you a little bit more. You might be shelling out another 10, 15 bucks."

"You can't put a price tag on Christmas," Boothe chimed in.

Hegseth suggested that the cost of Christmas trees could be averted by going to "middle America" and chopping down a tree, which he said he had done "many, many times."